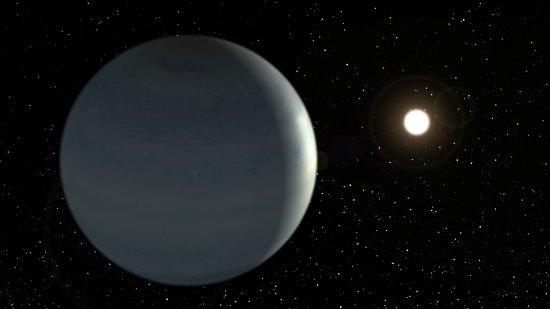 The CoRoT satellite discovers the first Jupiter-like exoplanet, which can be studied in detail when it passes in front of its central star.

The CoRoT satellite, operated by the French space agency CNES, has discovered a Jupiter-sized planet orbiting a star similar to the Sun in the constellation Serpens Cauda at a distance of 1.500 light-years from the Earth. The parameters of this gas giant, which has features in common with the majority of exoplanets discovered so far, represents a valuable standard model when it comes to identifying new Jovian-type bodies with moderate temperatures.

According to Hans Deeg, a researcher at the Instituto de Astrofísica de Canarias (IAC), who led the international team of 60 astronomers, and whose discovery will be published tomorrow in Nature, 'Corot-9b is the first exoplanet that is definitely similar to a planet in our Solar System.'

Analysis of its transits has provided more information on Corot-9b than for other exoplanets of the same type. More than 400 exoplanets have been discovered so far, 70 of them through the transit method. A transit occurs when a celestial body passes in front of its host star and blocks some of the star's light. This type of eclipse causes fluctuations in the apparent brightness of the star and enables the planet's mass, diameter, density and temperature to be deduced. The fact that Corot-9b takes 95 Earth days to orbit its star demonstrates the usefulness of this method in finding planets with long orbital periods. Indeed, its period is about 10 times longer than of any planet previously discovered by the transit method.

The astronomical community has been looking during the last decade for a transiting extra-solar planet with a "pure, isolated" history of evolution, without the contamination and interference of its parent star. The new planet maintains a relatively large distance from its central star, similar to the orbit of Mercury around the Sun. This means that planetary evolution models can be applied without corrections required by the influence of the parent star, as has been the case with other transiting planets.

'The planet is mostly made of hydrogen and helium,' says University of Nice (France) astrophysicist Tristan Guillot, 'but it may contain up to 20 Earth masses of other elements, including highly pressured and very hot water and rocks. It is thus very similar to the Solar Sytem's giant planets, Jupiter and Saturn.'

The temperature of its gaseous surface is expected to be between 150 degrees and minus twenty degrees Centigrade, with minimal variations between day and night and depending on the possible presence of a layer of highly reflective clouds. The international team of astronomers participating in the discovery notes that temperate gas giants are, so far, the largest known group of planets.

Corot-9b is the first of these to permit a study in such detail, so that, according to Brandon Tingley, another IAC researcher involved in the discovery, 'this could lead to a better understanding of such commonly occurring planets and open up a new field of research into the atmospheres of moderate and low-temperature planets.'

The CoRoT (Convection, Rotation and Transits) space telescope has been constructed by CNES, with contributions from Austria, Germany, Spain, Belgium, Brazil and the European Space Agency (ESA). It was specifically designed to detect transiting exoplanets and carry out seismological studies of stars. Its results are supplemented by observations with several ground-based telescopes, among them the IAC-80 telescope (Teide Observatory, Tenerife). Research related to the CoRoT mission at the IAC is funded by Spain's Ministry of Science and Innovation.