Fecha de publicación:
8
2018
Revista
Astronomy & Astrophysics
Descripción
The magnetism at the poles is similar to that of the quiet Sun in the sense that no active regions are present there. However, the polar quiet Sun is somewhat different from that at the activity belt as it has a global polarity that is clearly modulated by the solar cycle. We study the polar magnetism near an activity maximum when these regions change their polarity, from which it is expected that its magnetism should be less affected by the global field. To fully characterise the magnetic field vector, we use deep full Stokes polarimetric observations of the 15 648.5 and 15 652.8 Å FeI lines. We observe the north pole as well as a quiet region at disc centre to compare their field distributions. In order to calibrate the projection effects, we observe an additional quiet region at the east limb. We find that the two limb datasets share similar magnetic field vector distributions. This means that close to a maximum, the poles look like typical limb, quiet-Sun regions. However, the magnetic field distributions at the limbs are different from the distribution inferred at disc centre. At the limbs, we infer a new population of magnetic fields with relatively strong intensities ( 600-800 G), inclined by 30° with respect to the line of sight, and with an azimuth aligned with the solar disc radial direction. This line-of-sight orientation interpreted as a single magnetic field gives rise to non-vertical fields in the local reference frame and aligned towards disc centre. This peculiar topology is very unlikely for such strong fields according to theoretical considerations. We propose that this new population at the limbs is due to the observation of unresolved magnetic loops as seen close to the limb. These loops have typical granular sizes as measured in the disc centre. At the limbs, where the spatial resolution decreases, we observe them spatially unresolved, which explains the new population of magnetic fields that is inferred. This is the first (indirect) evidence of small-scale magnetic loops outside the disc centre and would imply that these small-scale structures are ubiquitous on the entire solar surface. This result has profound implications for the energetics not only of the photosphere, but also of the outer layers since these loops have been reported to reach the chromosphere and the low corona.
Proyectos relacionados 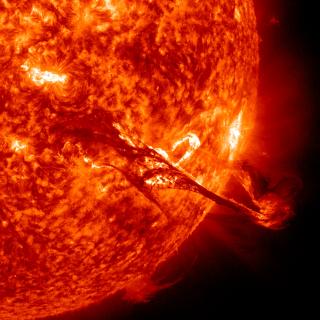