A Be-type star with a black hole companion. 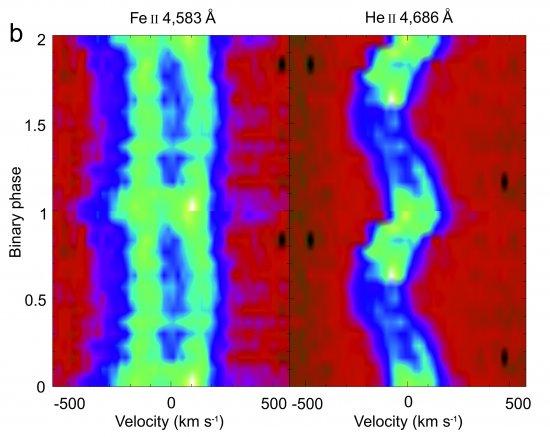 Stellar-mass black holes have all been discovered through X-ray emission, which arises from the accretion of gas from their binary companions (this gas is either stripped from low-mass stars or supplied as winds from massive ones). Binary evolution models also predict the existence of black holes accreting from the equatorial envelope of rapidly spinning Be-type stars (stars of the Be type are hot blue irregular variables showing characteristic spectral emission lines of hydrogen).  Of the ~80 Be X-ray binaries known in the Galaxy, however, only pulsating neutron stars have been found as companions. A black hole was formally allowed as a solution for the companion to the Be star MWC 656 (also known as HD 215227), although that was based on a single radial velocity curve of the Be star, a mistaken spectral classification and rough estimates of the inclination angle. Here we report observations of an accretion disk line mirroring the orbit of the Be star. This, together with an improved radial velocity curve of the Be star through fitting sharp Fe II profiles from the equatorial disk, and a refined Be classification (to that of a B1.5–B2 III star), reveals a black hole of 3.8 to 6.9 solar masses orbiting MWC 656, the candidate counterpart of the γ-ray source AGL J2241+4454. The black hole is X-ray quiescent and fed by a radiatively inefficient accretion flow giving a luminosity less than  1.6 × 10−7 times the Eddington luminosity. This implies that Be binaries with black-hole companions are difficult to detect by conventional X-ray surveys.