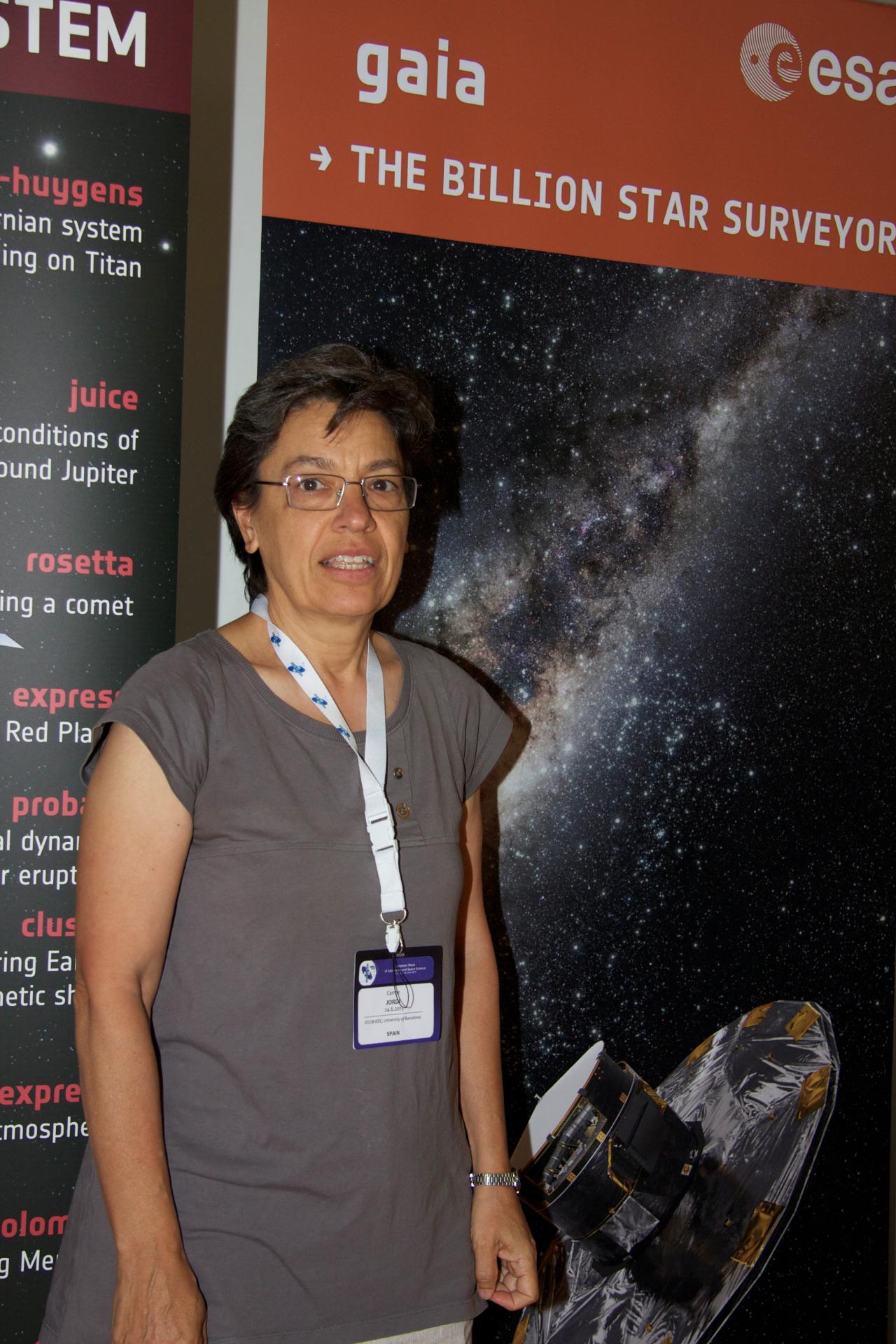 “Once understood how to deal with the initial issues of the satellite, the science with Gaia is assured”

“The first publication of data is planned for summer 2016”

Carme Jordi is an astronomer at the University of Barcelona and a member of the Gaia Science team, which advises ESA on the scientific aspects of the mission of the European Space Agency.

The satellite Gaia, at one and a half million kilometers from the Earth, contains two telescopes which are making a map of the positions and motions of over a billion stars in our Galaxy. It was launched in December 2013, and after some initial corrections were made, began its observations in July 2014. Now assessments from real data of these first months have been presented.

The Gaia satellite was launched in December 2013, a year and a half ago. ¿What has Gaia done since then?

The first thing it had to do, clearly, was to travel to the L2 point, which is from where it operates, at one and a half million kilometers from Earth. In the first days all the on-board systems were tested, in what is known as the “commissioning phase” of the instrument, during which it was shown that everything was working well, including the software, the mirrors were cooled to operating temperature, and the satellite was decontaminated.

This commissioning phase took a bit longer than was expected, it was supposed to finish at the end of April 2014, but took until the middle of July, because we had some surprises. For example there was water on the mirrors because the residual moisture had not been eliminated from the satellite. In addition the scattering of sunlight from the edges of the sunshield produced a sky background signal higher than we had calculated. Once those two problems, and some other minor problems, had been solved, Gaia could start to observe the stars and other objects in the Milky Way at the end of July.

What has Gaia observed in the first ten months since it was effectively set to work?

Since July 2014 Gaia has observed exactly as it should. We have now made a complete observation of the sky, with some two billion objects observed, rather more than anticipated, because we have also been able to observe fainter objects.

In ten months Gaia has carried out 20 billion observations, with a total of 180 billion individual images taken. The mean value is some two million observations per hour. Gaia has also recorded 40 billion spectra at low resolution, and one million and a half spectra at high resolution. In all we have 44 terabytes of raw data. It is far more than all the data on the Milky Way collected from the ground.

The software is a very important part of this mission, and this includes the on-board software as well as that used on the ground to digest and process all the data. All this software was designed using simulated data, and it is notable that the ground-based software is working very well now we have adjusted it to take real data. The response, and the efficiency are excellent.

When will it be possible to do science with these observations?

We´re working on it. We have already seen positions and spectra (and have published some of these in ESA’s “Image of the Week”), and we have shown that we can distinguish between cool and hot stars, redder, and bluer stars, etc. That is to say that the spectra are showing that we can perform stellar classification as we had planned. We have also seen known variable stars, and have shown that we can do scientific work on them. So far we have not done real science: in fact the Gaia Sata Processing and Analysis Consortium is responsible only for processing the data. The science will be done once they are published. The first publication of the data is foreseen for the summer of 2016, when we will publish the positions and magnitudes of all the objects detected.

We will also try to publish the combination of the positions detected by Gaia and those previously found by Tycho and Hipparcos. This will allow us to work out the first “proper motions” and the first parallaxes, which will give us the distances to these stars. Some experiments of this type have already been performed, and the results are very promising. The science which can be done using these comparative data is far greater than if we restricted ourselves to the positions and magnitudes. The science with Gaia is assured.

The Gaia mission also plans to send out warnings. What are these, and how many have been sent out up to now?

As well as the continuous observations of the Galaxy, Gaia also sends out warnings when we find something which would be interesting to observe from the ground straight away. For example, if a supernova is detected. These stellar explosions which mark the deaths of stars last for only a few weeks, so that if Gaia discovers one it is important to communicate it immediately to the scientific community, so that ground-based observatories can observe it repeatedly. The first Gaia alert was sent out at the beginning of September 2014, and since then 274 alerts have been emitted.

It is also planned to send out alerts when se discover a new object within the Solar System, so that observatories can follow the object from the ground and determine its orbit. So far we have not emitted any alerts of this kind, but we foresee that they will begin to go out during this year.

What will Gaia be observing in the coming months?

Gaia has covered the whole sky, and some stars have already been observed more than once. The key point is to observe the stars more than once during a period of five or six years. The only way to tell if a star is moving is to observe it at different times, and that is just what Gaia is doing. We will be able to measure the motion of the star and its distance from us, and if a star changes its magnitude we will be able to detect this, and see that it is a variable, whether this is due to an eclipse of one star by another, or whether a planet has transited across its disc.

As well as observing the stars in the Milky Way, Gaia will also observe Solar System objects, What sort of observations are these?