A visible green laser beam links the Optical Ground Station (OGS) to the Island of La Palma. This multiple exposure picture includes the Milky Way and the Teide volcano in the background. Credits: IQOQI Vienna, Austrian Academy of Sciences
Advertised on
11/11/2022 - 18:27

The workshop “25 years of cooperation in optical technologies and future trends”, will take place next Monday, November 14th, at the Headquarters of the Instituto de Astrofísica de Canarias (IAC) with scientific and engineering staff from the IAC, and from ESTEC, the European Space Technology and Research Centre of the European Space Agency (ESA).

At the meeting, the two institutions will present their work on optomechanical engineering and set out the basis for further collaboration. They will discuss, among other subjects, thermal techniques and optical instrumentation developments, cryo-cooler systems, nano and micro satellites, free-space optical communications, and adaptive optics (see the programme).

During their stay on the island, the ESA participants will visit with Rafael Rebolo, the Director of the IAC, accompanied by José Gavira, Head of Mechanical Department at ESA/ESTEC, ESA’s installations at the Teide Observatory. They will pay special attention to the Optical Ground Station (OGS) a 1 metre telescope which has been particularly successful doing laser communication with satellites and tracking space debris.

The OGS is the direct outcome of the first collaboration agreement between ESA and the IAC, signed during April 1994 by Jean-Marie Luton, then ESA Director General, and Francisco Sanchez, Founding Director of the IAC, which planned the building of an optical ground station in Tenerife.

After 25 years cooperating in programmes of optical data connection and transmission at the Teide Observatory, ESA and the IAC agreed on the extension of the agreement in order to include space missions and space debris tracking. On May 22nd 2019, Franco Ungaro, Director of Technology, Engineering and Quality, and Rolf Densing, Director of Operations, on ESA’s behalf, and Rafael Rebolo, the Director of the IAC, signed a new agreement.

De facto, since the 1990’s the IAC had developed instruments for ESA space missions, such as ISO (Infrared Space Observatory) , to study the cool and dusty regions of the universe (launch in 1995); SOHO (SOlar and Heliospheric Observatory), to learn about the interior, the surface, and the atmosphere of the Sun (1995); Planck, to analyse the Cosmic Microwave Background (2009), Herschel, to observe the formation and evolution of the stars and their interaction with the interstellar medium, as well as the study of galaxies (2009); Solar Orbiter, to study the solar wind, the solar cycle and the polar regions of our star (2020); Euclid, to investigate the geometry of the dark matter and the dark energy of the universe (2023); and Plato (PLAnetary Transits and Oscillations of stars), designed to explore systems of extrasolar planets (2026).

In a different field, the IAC has contributed with the Gran Telescopio Canarias (GTC) to ESA’s programmes of Planetary Defence, aimed at protecting the Earth from possible strikes by asteroids. For example, in 2019 it observed the asteroid 2019 DS1, of some 20-40 metres in diameter. At the present time, the IAC is working on ESA’s Hera mission, a probe to meet with a binary system of asteroids as part of a programme to show how useful impacts could be if an asteroid were on a collision course with the Earth. Hera will be launched in 2024

This is not the only preventive programme in which ESA and the IAC are collaborating. There is also joint work concerning the remains of satellites and other inactive instruments in space. ESA has, at the Teide Observatory, a new station dedicated to following up on the problem of space debris: the IZN Laser Ranging Station, whose laser sights the positions of objects in space with an accuracy of centimetres.

Next Monday’s ESA-IAC workshop implies a bet on the future of optical communications and other fields of cooperation.

OGS milestones, from ARTEMIS to the Nobel Prize

The IAC participated in the general design of the instrumentation for the Optical Ground Station (OGS) , specifically designing the electronics and the control software of the optical communication system with satellites, including the system of acquisition, pointing, and following. The IAC also designed adaptative optics techniques, termed “tip-tilt”, to compensate for the effects of overall movements of the light in an image due to atmospheric turbulence. The final aim was to establish a communications link via a laser signal which must be sent with high precision from the OGS to the satellite and viceversa.

Demonstrating the viability of optical communications with space was a pioneering achievement carried out in 2001 with the successful laser link in both directions between the satellite SPOT-4 of the French CNES (National Centre for Space Studies) in low Earth orbit, and ESA’s ARTEMIS geostationary satellite. Shortly aftewards the OGS communicated many times with ARTEMIS to characterise atmospheric turbulence under different conditions in order to optimise the design of optical terminals for the next generation satellites.

From 2005 onwards, the IAC implemented on the OGS the control instruments required to carry out optical communications with satellites in low Earth orbit, which cross the sky in short periods, between 5 and 10 minutes. This type of links needs a telescope with high precision pointing and following capabilities.

Since then, the OGS has “talked” often with this type of satellites, among them NASA’s NFIRE (Near Field Infrared Experiment), OICETS (Optical Inter-orbit Communications Engineering Test Satellite "KIRARI"), of JAXA, the Japanese Space Agency, ESA’s Alphasat, and the International Space Station (ISS). It has also communicated with SMART-1 (Small Mission for Advanced Research and Technology) , the first lunar mission by ESA, during its cruising phase towards the Moon. The OGS initiated links over large distances with NASA’s LADEE (Lunar Atmosphere and Dust Environment Explorer), which are considered links to deep space.

Another great success for the OGS and its operations team is to have provided support for the experiments of quantum teletransportation between the islands of Tenerife and La Palma by Anton Zeilinger, awarded (with Alain Aspect and John F. Clauser) the Nobel Prize in Physics “for experiments with entangled photons, establishing the violation of Bell inequalities and pioneering quantum information science”. Zeilinger used a terminal at the Roque de los Muchachos Observatory (Garafía, La Palma) to generate entangled photons which were detected at the OGS with different protocols of quantum distribution. 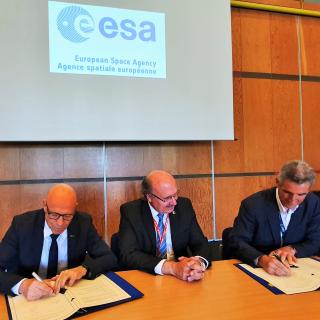 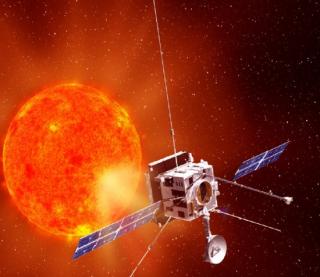