Today Monday, July 3rd, an academic presentation ceremony of a new astronomical observing project was celebrated at the Roque de los Muchachos Observatory (Garafía, La Palma, Canary Islands). GOTÖ (Gravitational-WaveOptical Transient Observatory) is a telescope designed to detect the optical counterparts of the sources of gravitational waves. It is a collaboration between the Astronomy and Astrophysics Group at the University of Warwick (United Kingdom), and the Monash Astrophysics Centre (Australia) with funding from the Monash-Warwick Alliance. Other collaborators are the Armagh Observatory, the University of Sheffield, and the University of Leicester (UK) and the Institute of Astronomical Research of Thailand.

Participants in the ceremony, in order of their intervention, were the Director of the IAC, Rafael Rebolo, who stressed the long tradition of collaboration, of over thirty years, between the Instituto de Astrofísica de Canarias and the United Kingdom, a collaboration which has brought benefits to both parties..

The directors of the GOTO project, Don Polacco and Daniel Steeghs, pointed out that the science which they wish to perform with this telescope is uniquely possible from La Palma “with our colleagues at the IAC”. They said that it was a very exciting moment, and thanked local help and that of the Isaac Newton Group of Telescopes.

The Mayor of Garafía, Martín ¨Taño, welcomed everyone to the municipality of Garafía, and said that it was a very special day, due to the presence of the British researchers, and stressed strongly that this municipality is very proud to work with them and with the IAC. During the meeting the Mayor and the Director of the IAC said that they very much wanted to work for closer cooperation between their institutions, and they discussed possible future collaborations within the municipality.

The councillor in charge of the Society for the Development of La Palma (SODEPAL), Jordi Pérez Camacho, representing the Cabildo of La Palma, said that research is of high importance, notably the scientific advances in astronomy which are being carried out, and thanked the IAC and the media of communication and the authorities for putting La Palma 2on the map” as a reference point for research, and the development of new technology.

Finally, Miguel Angel Morcuende Hurtado, the director on the island of La Palma of the Administration General of the State, declared the “unavoidable commitment of the Government of Spain to the continuity of astrophysics research, and that the more countries who participate in this centre the better”. He spoke of a very special future which would produce very important advances and added “Science should be put in its proper place. Here you are achieving a major synergy in the science of the future, and we should be very happy that here there are so many countries working together in peace.

After these words the vice.Rector of the University of Warwick uncoverd the plaque on the new telescopic installation on La Palma

The Councillor of the Regional Government of the Canaries for Territorial Policy, Sustainability, and Security, Nieves Lady Barreto Hernández, was finally unable to attend because of a clash in her agenda.

The GOTO project is matrix of telescopes, mounted jointly on a robotized strucutre, which can map large regions of the sky to look for transitory phenomena. They are designed to respond very rapidly and automatically with the aim of observing optical counterparts corresponding to the detection of gravitationa waves by the LIGO and Virgo experiments.

GOTO is the first installation of the Canary Islands Observatories which has a 1Gbps direct data connection between the telescope and the University of Warwick, configured on the optical infrastructure of RedIRIS as a connection from end to end, equivalent to a direct wire between both points.

The initial instrument, now installed at the Roque de los Muchachos Observatory, has four astrographs (with a total capacity for 8) of 40 cm diameter, with high sensitivity CCD cameras. These instruments allow the coverage of a field of some 5 square degrees each, and can detect objects down to 21st magnitude.

The design principle of the project is that each instrument be composed of 8 telescopes on a single automated structure, protected an all-sky dome. Its design is scalable, adaptable, can be brought up to date, and uses commercial components to minimize costs. A second unit is planned for the Roque de los Muchachos Observatory, and another in Australia.

Press release of the University of Warwick: http://www2.warwick.ac.uk/newsandevents/pressreleases/telescope_for_detecting 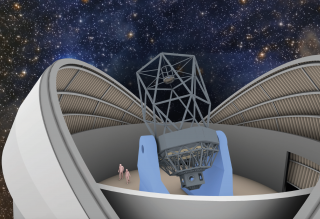 The NRT (New Robotic Telescope) is a project to design and build a 4-meter telescope within five years, which from the ORM will operate in a totally autonomous and robotic way. This form of operation will make it the largest robotic telescope in the world. 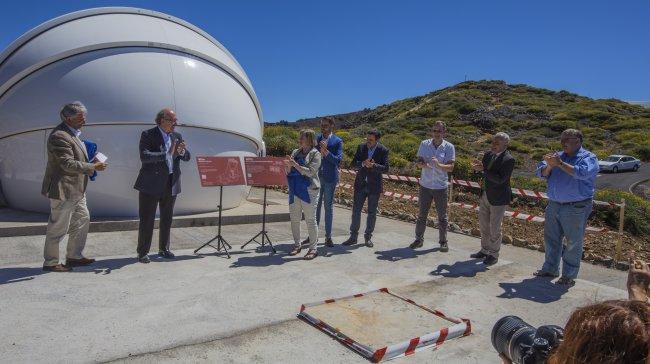