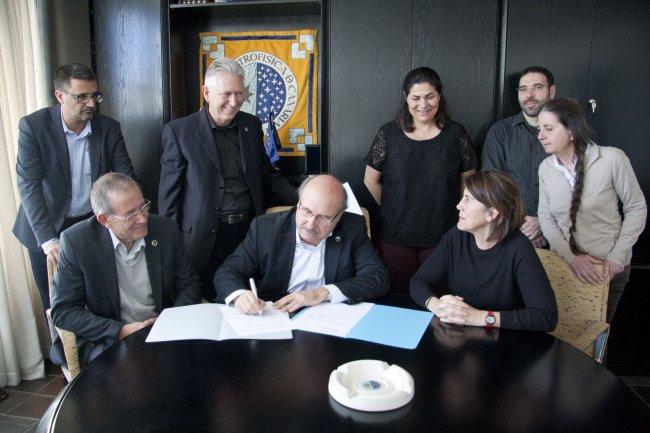 Clearing a major milestone to construct and operate the Thirty Meter Telescope (TMT) in La Palma, Canary Islands, the TMT International Observatory (TIO) and Instituto de Astrofisica de Canarias (IAC) today signed a hosting agreement. While Maunakea in Hawaii continues to be the preferred choice for the location of the TMT, the hosting agreement defines how the alternative site will be available if Maunakea proves infeasible.

“This is an important step for TMT,” said TMT Executive Director Ed Stone. “We want to ensure we have a suitable site to start construction by April 2018 should Maunakea not be feasible. We now have a signed agreement and are moving ahead with the appropriate government approvals so that everything will be in place if needed.”

The bilateral hosting agreement governs the conditions for hosting TMT at Observatorio del Roque de los Muchachos (ORM) on La Palma, its future operation and eventual demolition, removal and restoration of the site. Among the terms of the 75-year agreement are the right to construct and operate, the use of the land, access to infrastructure and common services, and headquarters facilities in La Palma and Tenerife. In return, Spain will receive 10 percent of the observation time, once operational.

“We are excited about the possibility of welcoming TMT to the Observatorio del Roque de los Muchachos on La Palma,” said IAC Director Rafael Rebolo. “The capacity for exciting astronomical discoveries is beyond thrilling. This hosting agreement well serves TIO, Spain and the worldwide astronomy community.”

“The true spirit of collaboration between TIO and Spain has been really uplifting”, added Prof. Tom Soifer of the California Institute of Technology (CALTECH) and TIO Board Member. “We thank the IAC and Spain for their tremendous support and for the warm welcome to ORM.”

TMT is currently awaiting the outcome of a contested case hearing in Hawaii that will decide on the Conservation District Use Permit needed for construction to begin on Maunakea.

The Thirty Meter Telescope Project has been developed as collaboration among the California Institute of Technology (Caltech), the University of California (UC), the Association of Canadian Universities for Research in Astronomy (ACURA), and the national institutes of Japan, China, and India. The TMT International Observatory LLC (TIO), a non-profit organization, was established in May 2014 to carry out the construction and operation phases of the TMT Project. The Members of TIO are Caltech, UC, the National Institutes of Natural Sciences of Japan, the National Astronomical Observatories of the Chinese Academy of Sciences, the Department of Science and Technology of India, and the National Research Council (Canada); the Association of Universities for Research in Astronomy (AURA) is a TIO Associate. Major funding has been provided by the Gordon & Betty Moore Foundation.

The Instituto de Astrofísica de Canarias (IAC) is a public research organization funded by the Governments of Spain and the Canary Islands with participation of the University of La Laguna and Consejo Superior de Investigaciones Científicas. The IAC hosts two Observatories (Teide and Roque de los Muchachos) where research institutions from more than 20 countries operate optical, infrared and microwave telescopes including the Spanish 10.4 m Gran Telescopio Canarias. For more information about IAC, visit www.iac.es