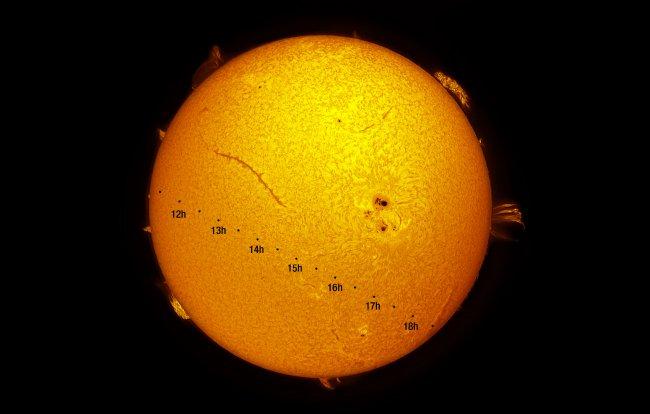 Computer generated transit of Mercury and image of the Sun in Halfa. The image shows the direction, from left to right, which will follow the planet (represented by the black circle drawn to scale) during the seven hours it takes to traverse the solar dis
Advertised on
06/05/2016

Next Monday, 9th May there will be a transit of Mercury. For a period of seven and a half hours (between 12:12 and 19:42 local time in the Canaries, approximately an hour later in the Peninsula) the dark disc of Mercury will be silhouetted against the blinding disc of our star, the Sun. This is not a frequent phenomenon, it happens around thirteen times per century, and the next such transits will be in 2019 and 20132. Although it will be completely visible from throughout Spain, it will not be possible to observe it without using a telescope because of the planets small angular size.

The planets move around the Sun in a clockwise direction, but though the clock hands coincide every 65 minutes and five seconds, the planets align on astronomical timescales. Observing Mercury from the Earth we know that it circles the sun once every 116 days, around three times in one year. So why must we wait for between 3.5 and 13 years to see it transit the Sun. The reason is the same as that which prevents us from having an eclipse of the Sun and the Moon every month, because their orbits are inclined with respect to ours (by 7 degrees in Mercury’s case) and they only line up correctly when the two orbital planes coincide. If not, Mercury passes above or below the bright solar disc, and a transit is not seen.

Mercury is small. It’s diameter is 4.879.4 km, little more than one third that of the Earth. Jupiter’s third satellite, Ganymede, is bigger than Mercury. It is the nearest planet to the Sun and its orbit is notably eccentric. Its distance from the Sun varies between 46 and 70 million kilometres, and its orbital velocity between 59 and 39 km/s. The temperatures on its Sun-facing side and the opposite side are some -180 degrees and +400 degrees Celsius respectively. Many of the basic data for Mercury are remarkable. One day on Mercury (the time between two sunsets in the planet) lasts two Mercury years (two complete orbits around the Sun).

Mercury has been known to us for thousands of years, as it can be observed with the naked eye as a "star" close to sunrise or sunset. The planets and the stars are easily distinguished in the sky because the stars always remain in fixed positions relative to each other, while the planets move with respect to them. Some civilizations, such as the Greeks, gave it two names (Hermes and Apollo) according to whether it was visible at dawn or at sunset. Its angular diameter, a maximum of 13 arc seconds is five times smaller than we can resolve with the naked eye. For that reason transits of Mercury were not observable until the invention of the telescope. Pierre Gassendi was the first person to observe a transit of Mercury.  This was on November 7th 1631, and had been predicted years previously by Johannes Kepler.

During a transit we can pick out three key periods. The first, the ingress, lasts from when the disc of the planet touches the outside of the luminous solar disc ("first contact") until it has finished entering the solar disc. The second, intermediate phase occurs when the distance between the planet and the Sun is a minimum, and the third the "egress"  is the period between the internal contact of the edge of the planet’s disc with the edge of the Sun’s disc and the moment when it leaves the disc completely (last contact). The exact times for each of these event depends on the position of the observer on the Earth, and can vary by up to a maximum of two minutes. Referred to the centre of the Earth, these times are 11:12-11:15, 14:57, 18:39-18:42 respectively (all in Universal Time). To obtain local times we should add one hour for the Canaries and two for the rest of Spain.

It is relatively recently that we have known the distances between the bodies of the Solar System. At the end of the XVIII century it became possible to determine with some degree of accuracy the value of the Astronomical Unit (the distance between the Earth and the Sun), using the transit of Venus. Nowadays a transit of Mercury is useful for calibrating instruments, for measuring the chemical composition of its exosphere...and not much else. However transits are more in vogue than ever. More than half of the exoplanets (planets in orbit around other stars) have been discovered using this method, in which the planet occults a small fraction of the light of its star, producing a characteristic fall in the light of the star. It won’t be long before we discover Earth-like planets using their transits.

Images and vides will be published at our website (http://www.iac.es/index.php?lang=en) and social networks.

Media interested can go to the observatories and make interviews during the broadcasting. Please confirm during the day through the media contact listed below.