“The Universe is the best particle accelerator”

It has been six years since the AMS-02 experiment was set up on the International Space Station (ISS). During this time the Alfa Magnetic Spectrometer (AMS) has registered 117,000 million events of which 8 could be the first detections of primordial antimatter. “It’s a very poor statistic, we need to make sure, but it could be a first indication that this exists” said the head of the Astroparticles group at the Instituto de Astrofísica de Canarias (IAC) Ramon García López, for whom “The Universe is the best existing particle accelerator”.

The previous AMS Days meeting took place in 2015 at CERN in Geneva. Three years later the particle physicists, especially the astroparticle physicists, have collected a large harvest of data. Their statistics about the elements in the Universe have improved significantly, which has allowed them to improve their knowledge of how the elements have behaved over time, and what are the relationaships between them.

“There have never been statistics like this in the field of astroparticles” says García López. “What we have learned in these days” he explains “ is that there are many errors in the theories, because there are lacunae which will have to be explained in the future. The previous hypotheses, which had been developed with the data we had from experiments prior to AMS are not valid. “This meeting has given us the challenge” he concludes “ Colleagues, we have all of these data on the table, and now we need to explain it!".

Mónica Vázquez Acosta, the scientist in charge of the IAC’s participation in the LST project of the CTA (Cherenkov telescope array) and a member of the AMS collaborfation explains that “space based and ground based experiments are giving us results about the flux of cosmic rays with unprecedented accuracy, which is a challenge for current theoretical models”, and she adds “The AMS Days rmeeting in La Palma, with leading experts in the field of cosmic ray physics, both theorists and experimentalists, allows us to bring together the results obtained, and to develop new ideas to advance our understanding of such a complex field”.

Samuel Tingo, on the Pathway of the Stars

Motivated by his visit to La Palma, and in recognition of his important participation in the history of Physics, yesterday Samuel Ting accepted a small scale model of the star which will bear his name in the Pathway of the Stars of Science in Santa Cruz de La Palma. Professor Ting received the Nobel Prize in Physics in 1976 for his discovery of a new sub-atomic particle called the “J particle”.

In the ceremony the first speaker was the Mayor of the capital of La Palma, Sergio Matos. “The very small and the immensely big are, for us in La Palma, dimensions which we are used to living with” he said, with an oblique reference to the theme of the AMS conference on astroparticles. He added that “ The Pathway of the Stars of Science continues to grow and is a fine example no only for our small piece of land, but for the immensity of the whole planet”.

The Director of the IAC, Rafael Rebolo, recalled the visit by Ting in the year 2000 and emphasezed the importance of the participation of the Instituto de Astrofísica de Canarias in the AMS experiment. He also thanked the Nobel Laureate for his support of the Institute during its selection as a Severo Ochoa Centre of Excellence.”We are in debt to Professor Ting and we are especially grateful for his presence here and this recognition which the Island of La Palma has given him”.

Afterwards the President of the Island Cabildo of La Palma, Anselmo Pestana, gave a brief summary of the history of the Roque de los Muchachos Observatory, stressing especially the “Law of the Sky” with protects it, and the World Declaration in Defence of the Night Sky and the right to Observe the Stars from La Palma. “To show our willingness to promote scientific knowledge related to the sky and to leave a legacy for future generations” the Cabildo and the City Council of Santa Cruz de La Palma agreed to create the Pathway of the Stars of Science, which gives recognition to those scientific personalities with international prestige who have visited the Island. Previously those who had received this award have been Stephen Hawking,Alekséi Leónov, Takaaki Kajita, and now Samuel C.C.Ting.

Finally Samuel Ting thanked the authorities for this recognition and then talked about the AMS experiment, emphasizing the results which have been obtained. Referring to what this honour means to him he commented that La Palma “Is not a large island, but the international prestige of the Instituto de Astrofísica de Canarias is large” I hope”, he added, that the giant Thirty Metre Telescope (TMT) originally foreseen to be instale don Hawaii, does come to La Palma in the end. And I believe that in the future the IAC will make fundamental contributions to our knowlege of the Universe”. 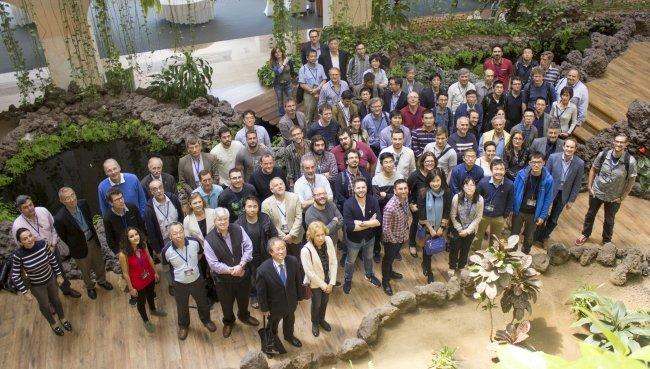