After the Kepler supernova explosion, no survivors were left behind

The Kepler supernova, of which currently only the supernova remnant remains, took place in the constellation of Ophiuchus, in the plane of the Milky Way, 16,300 light years from the Sun. An international team, led by the researcher Pilar Ruiz Lapuente (UB-IECC y CSIC), in which IAC researcher Jonay González Hernández participates, has tried to find the possible surviving star of the binary system in which the explosion took place.

In these systems, when at least one of the stars (with the highest mass) reaches the end of its life and becomes a white dwarf (WD), the other can begin to transfer matter up to a certain mass limit (equivalent to 1,44 solar masses, the so-called "Chandrasekhar limit"). This process leads to the central ignition of carbon in the white dwarf, producing an explosion that can multiply 100,000 times its original brightness. This phenomenon, brief and violent, is known as a supernova. Sometimes, as in the Kepler supernova (SN 1604), observed and identified by the German astronomer Johannes Kepler in 1604, they can be observed with the naked eye from Earth.

Kepler's supernova arose from the explosion of a white dwarf in a binary system. Therefore, in this research paper published today by The Astrophysical Journal, they were searching for the possible surviving companion of the white dwarf, which allegedly transferred mass up to the level of WD explosion. The impact of this explosion would have increased the luminosity and speed of the missing companion. It could even have modified its chemical composition. The team, therefore, searched for stars with some anomaly that would allow them to identify one of them as the companion of the white dwarf that exploded 414 years ago.

"We were looking - explains Pilar Ruiz Lapuente, researcher at the Instituto de Física Fundamental (IFF-CSIC) and the ICC of the UB (UB-IEEC) - a peculiar star as a possible companion of the progenitor of the Kepler supernova, and for this we have characterized all the stars around the center of the remnant of SN 1604. But we have not found any with the expected characteristics. So everything points to the explosion being caused by the merging mechanism of the white dwarf with another or with the core of the already evolved companion. "

To carry out this investigation, images taken with the Hubble Space Telescope (HST) were used. "The goal was to determine the proper motions of a group of 32 stars around the center of the supernova remnant that still exists today," says Luigi Bedin, researcher at Osservatorio Astronomico di Padova (INAF) and co-author of the work. They also used data obtained with the FLAMES instrument, installed at the 8,2m Very Large Telescope (VLT), at the European Southern Observatory (ESO) and used to characterize stars, determine their distance and their radial velocity with respect to the Sun. "The stars of the Kepler supernova field are very weak stars, only accessible from the southern hemisphere with a large diameter telescope such as VLT telescopes," says John Pritchard, an ESO researcher and another of the authors of this study.

"There is an alternative mechanism to produce the explosion. It consists of the merging of two white dwarfs, or the white dwarf with the carbon and oxygen core of the companion star, in a late stage of its evolution, in both cases giving rise to a supernova", explains Jonay González Hernández, Ramón y Cajal postdoctoral researcher at the IAC and co-author of the publication. "In the Kepler field we do not see any star that shows anomalies. However, - he adds - we found evidence that the explosion was caused by the merging of two white dwarfs or a white dwarf with the core of the companion star, possibly exceeding the "Chandrasekhar limit".

The Kepler supernova is one of the five "historical" supernovas of thermonuclear type. The other four are Tycho Brahe's supernova, documented by the Danish astronomer in 1572 and which has been also investigated by this team before; the SN 1006, was also studied by this team in 2012, the SN 185 (which could be the origin of the remnant RCW86); and the recently discovered SNIa G1.9 + 03, which took place in our galaxy around 1900 and was only visible from the Southern Hemisphere.

Animation of the origin of the Kepler Supernova of 1604: https://youtu.be/be2Qpw6om1E 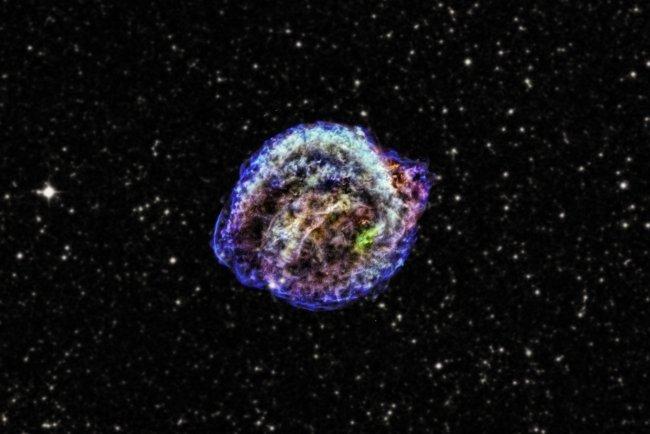