Astronomers map a record-breaking 1.2 million galaxies to study the secrets of dark energy 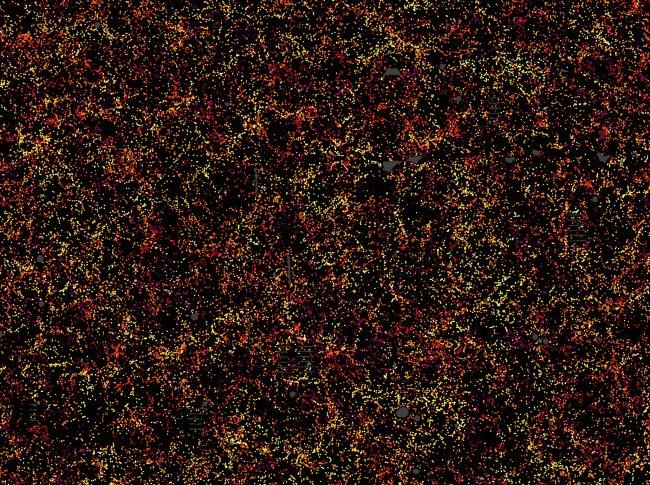 This is one slice through the map of the large-scale structure of the Universe from the Sloan Digital Sky Survey and its Baryon Oscillation Spectroscopic Survey. Each dot in this picture indicates the position of a galaxy 6 billion years into the past. Th
Advertised on
14/07/2016

Astronomers announced this week the sharpest results yet on the properties of dark energy.  Hundreds of scientists, among them Marcos Pellejero Ibañez and Jose Alberto Rubiño from the Instituto de Astrofísica de Canarias (IAC), and other Spanish institutions as the Instituto de Ciencias del Cosmos from the University of Barcelona (ICCUB) and the Instituto de Física Teórica (UAM-CSIC) from the Sloan Digital Sky Survey III (SDSS-III), collaborated to make the largest-ever, three-dimensional map of distant galaxies. The scientists then used this map to make one of the most precise measurements yet of the dark energy currently driving the accelerated expansion of the Universe.

"We have spent a decade collecting measurements of 1.2 million galaxies over one quarter of the sky to map out the structure of the Universe over a volume of 650 cubic billion light years,” says Dr. Jeremy Tinker  of New York University, a co-leader of the scientific team that led this effort.  “This map has allowed us to make the best measurements yet of the effects of dark energy in the expansion of the Universe. We are making our results and map available to the world."

These new measurements were carried out by the Baryon Oscillation Spectroscopic Survey (BOSS) program of SDSS-III.  Shaped by a continuous tug-of-war between dark matter and dark energy, the map revealed by BOSS allows astronomers to measure the expansion rate of the Universe and thus determine the amount of matter and dark energy that make up the present-day Universe.  A collection of papers describing these results was submitted this week to the Monthly Notices of the Royal Astronomical Society.

BOSS measures the expansion rate of the Universe by determining the size of the baryonic acoustic oscillations (BAO) in the three-dimensional distribution of galaxies. The original BAO size is determined by pressure waves that travelled through the young Universe up to when it was only 400,000 years old (the Universe is presently 13.8 billion years old), at which point they became frozen in the matter distribution of the Universe. The end result is that galaxies are preferentially separated by a characteristic distance, that astronomers call the acoustic scale. The size of the acoustic scale at 13.4 billion years ago has been exquisitely determined from observations of the cosmic microwave background from the light emitted when the pressure waves became frozen.  Measuring the distribution of galaxies since that time allows astronomers to measure how dark matter and dark energy have competed to govern the rate of expansion of the Universe.

To measure the size of these ancient giant waves to such sharp precision, BOSS had to make an unprecedented and ambitious galaxy map, many times larger than previous surveys.  At the time the BOSS program was planned, dark energy had been previously determined to significantly influence the expansion of the Universe starting about 5 billion years ago.  BOSS was thus designed to measure the BAO feature from before this point (7 billion years ago) out to near the present day (2 billion years ago).

The map also reveals the distinctive signature of the coherent movement of galaxies toward regions of the Universe with more matter, due to the attractive force of gravity. Crucially, the observed amount of infall is explained well by the predictions of general relativity. This agreement supports the idea that the acceleration of the expansion rate is driven by a phenomenon at the largest cosmic scales, such as dark energy, rather than a breakdown of our gravitational theory.

Marcos Pellejero Ibañez, doctoral student at the IAC, and José Alberto Rubiño, researcher at the same center, along with Chia-Hsun Chuang, from the Leibniz Institute for Astrophysics, have devised a new method for extracting cosmological BOSS data. Considering the cosmic microwave background and three-dimensional map of galaxies from BOSS to infer the cosmological parameters with minimal assumptions about dark energy, tested different models of the dark energy and confirmed that the used in the last 18 years, based on Einstein's cosmological constant, fits naturally.

"While it is computationally complex, we have shown that it is possible to do a thorough analysis combining these two cosmological observations and using increasingly complex evolutionary models of the Universe", explains Pellejero. Rubiño also adds that "the combination of these two sets of exceptional data (the Planck satellite and BOSS) has also enabled us to establish the best cosmological bounds about the sum of the masses of the three families of neutrinos and their relative contribution to the overall density of matter".

More information about this methodology in this article: “The clustering of galaxies in the completed SDSS-III Baryon Oscillation Spectroscopic Survey: double-probe measurements from BOSS galaxy clustering & Planck data - towards an analysis without informative priors”: http://arxiv.org/abs/1607.03152

Press release of the SDSS-III:
http://www.sdss.org/press-releases/astronomers-map-a-record-breaking-1-2-million-galaxies-to-study-the-properties-of-dark-energy/