The autumnal equinox from the Dolmen of Valdecaballeros

Next Tuesday, September 22nd, at 13:30 UT the Earth will be at a specific point in its orbit round the Sun: the September equinox. The September and March equinoxes are the only days in the year when the Sun rises exactly in the east and sets exactly in the west, across the whole planet. In practical terms the days at both the vernal and the autumnal equinoxes are divided equally into daytime and night-time, with each lasting approximately 12 hours. In fact the literal meaning of the word equinox, is “equal night” and comes from the latin work aequinoctium.

Live from the Dolmen of Valdecaballeros

The dolmens are megalithic funeral monuments built mainly between 4000 and 2500 years B.C. “In the particular case of the Dolmen of Valdecaballeros it has a funeral chamber (the place of collective burial, where the members of a community were buried) and an access corridor. This passage separated the world of he living from the world of the dead” explains Dr. Andrea Rodríguez Antón, an expert in achaeoastronomy.

The Dolmen of Valdecaballeros is in the tholos category, which means that it was closed by a covered roof. The whole monument was then covered over with earth and debris, forming a tumulus.

Thanks to research by archaeoastronomers such as Michael Hoskin, Juan Antonio Belmonte and Cesar González García, who have studied the orientation of megalithic tombs in Spain and Portugal, we know that these dolmens are oriented in a fairly coherent way. The majority point towards the East on the horizons of the different geographical areas analyzed. To be specific they point towards the sector of the horizon from which the Sun and the Moon rise, and some of the orientations coincide with dates close to the equinoxes, dates which mark changes of the seasons, and in the case of the autumnal equinox in Extremadura, mark the beginning of the rainy season.

The sky-live.tv channel will offer a live transmission of the sunrise, working within the Energy Efficiency Laboratories project (EELabs), and with the collaboration of the Office of the Director General of Tourism of the Junta of Extremadura and the project Extremadura Buenas Noches, from the Dolmen of Valdecaballeros (Extremadura).

"The vernal and autumnal equinoxes are the geometrical points in the Earth’s orbit around the Sun when a line from the centre of the Sun lies in the equatorial plane of the Earth. The people who live at the equator will see the Sun exactly overhead at local mid-day”, comments Miquel Serra-Ricart, an astronomer at the IAC, who is in charge of the broadcast.

Three Spanish Supercomputer centres: The Extremadura Centre for Advanced Technologies (CETA-CIEMAT), the Council of University Servers of Catalonia (CSUC) and the Instituto de Astrofísica de Canarias (IAC) are collaborating in distributing the broadcast of the web portal (sky-live.tv).

*Figure 1. Equinoctial sunrise (19 March 2019) from the Lácara dolmen (La Nava de Santiago, Extremadura, Spain). Although the alignment of the corridor does not exactly coincide with the sunrise at the equinox - look a few degrees further south-east - its orientation follows the trend of other nearby megalithic constructions. All of them are oriented towards the sunrise in the same specific region of the eastern horizon, which could mean an astronomical intention in the design of these impressive prehistoric funeral monuments. The initiative "Extremadura. Good Night" contributes to the conservation of Extremadura's astronomical heritage. The image was APOD from NASA on 21st September 2019. Photo J.C Casado. High Resolution.

Press release
Dolmens and the Equinox

Next Sunday, September 23rd, will be the September equinox, the autumnal equinox in the northern hemisphere, and the vernal equinox in the southern hemisphere. The two equinoxes, in September and March, are the only days when the Sun rises exactly in the east and sets exactly in the west. The autumnal equinox will be broadcast live from the Dólmen Zarfra3 in Valencia de Alcántara (Cáceres, Extremadura) via the channel sky-live.tv, on the early morning of September 23rd, with the collaboration of the European STARS4ALL project, and an iniciative of the Junta of Extremadura “Extremadura, Good 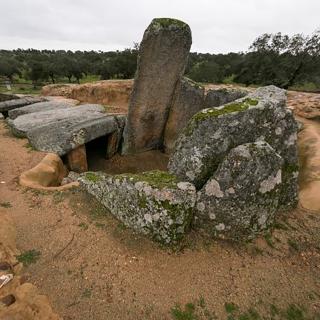