The conference “Giving an impulse to Astrophysics in Spain: 50 years of doctoral theses” is inaugurated

This meeting of researchers linked to the Instituto de Astrofísica de Canarias (IAC) and its Observatories opened yesterday with a lectura by Francisco Sanchez, the founding Director, and the first full professor of astrophysics in Spain, in which he told us about how this scientific speciality was born and consolidated in Spain, a history which is related in his book “Dreaming of the Stars” (Soñando Estrellas). His talk was preceded by a formal act of inauguration, with authorities and organizers, and a talk by the present Director of the IAC, Rafael Rebolo, about the present and the future of the IAC.

The conference “Giving an impulse to astrophysics in Spain: 50 years of doctoral theses in the IAC”, organized by the Instituto de Astrofísica de Canarias (IAC) and the University of La Laguna (ULL) was inaugurated yesterday, Wednesday in the Teatro Leal de La Laguna, and which will be celebrated until Friday in the Faculty of Physics of the ULL, is more than a meeting, it is a “re-meeting”. This is how it was seen by Ignacio González, the Coordinator of Higher Education and the Director of the Department of Astrophysics of the ULL who, in his speech at the inaugural act as organizer of the conference insisted on emphasizing the “social nature of the event” and explained that the IAC, as with all research centres, “ is essentially composed by its theses”.

In the following speech Rubens Ascanio, the first Deputy Mayor, and Councillor for Social Welfare of the City Council of La Laguna congratulated the IAC for these 50 years of scientific research and outreach and expressed his wish to continue to support an outstanding research centre “which, by good fortune, is in our municipality”. He also made reference to how astrophysics had changed the sense of what it is to be human, and for that reason “the 50th anniversary of the first time humans set foot on the moon and the 60th anniversary of the founding of the Teide Observatory have also helped us to identify ourselves”. He added “The Instituto de Astrofísica de Canarias has been helping us to understand the universe for a long time now, via its observation and study of the night sky".

Synergy with the University

Rosa María Aguilar, the Rector of the University of La Laguna, in her speech, stressed “ the fruitful relation between the University and the IAC. We are proud to have a centre of world quality in our midst, which which we share synergies and with which we try to carry out global science form a local base. Clearly the academic and scientific contacts between us are many, and strong. We publish research articles together, we supervise doctoral theses together, we carry out common projects, we innovate and we transfer, and above all we work for the future of hundreds of young researchers. It is clear that there is a symbiosis between our Department of Astrophysics, the section of Physics and Mathematics, and the Institute itself, because many of our staff work in the Institute day by day, and we share resources, research colleagues, and many scientific challenges. Here Physics and Astrophysics have their own personality. They have made a space within society and enjoy the respect of the citizens who have seen that with their taxes it is possible to carry out frontier science and the science of the future".

Present and future of the IAC

Rafael Rebolo, the Director of the IAC gave a talk about the present and the future of the Instituto de Astrofísica de Canarias, reminding us that “the IAC is first and foremost its people, over 400 members”. It is a team comprising researchers, technicians, administative staff, and predoctoral researchers. He noted the lines of research in which the IAC is working, notably solar physics, stellar and interstellar physics, the formation and evolution of galadies, exoplanets and planetary systems, cosmology astro-particle physics, and scientific instrumentation, fields which will be covered today and tomorrow by twenty talks in which researchers with doctorates at the ULL-IAC will show their scientific activity, ioncluding achaeoastronomy, Big Data, teaching, astronomical outreach, and space science in an African university. Rebolo also commented on the postdoctoral programme of the IAC and the programmes of the doctoral students, the technological projects, and new large telescopes for the Canary Island Observatories, (NTR, LEST, and the CTA array) as well as the countries and institutions collaborating in the Observatories. “We are continuing to work to obtain a super-sized telescope in the 30-40m class or bigger, and will continue to drive optical and infrared astronomy in the Canaries and in the rest of Spain for the next 50 years".

“Dreaming about the stars”

“Walker, there is no path, we make the path as we walk”. With verses inspired by the well known poem by Antonio Machado the Founding Director Francisco Sanchez, the first Professor of Astrophyisics in Spain, started his inaugural address. In his speech the veteran astrophysicst made continual references to his recently published book “Dreaming about the Stars “ (“Soñando Estrellas”), a narrative about how astrophysics and it related technologies were born and rapidly consolidated in Spain. This is filled with anecdotes, and has a foreword by Brian May, the guitarrist of Queen. Francisco Sanchez told us about “how hard were the first years in the Canaries” when, recently married, he came with his wife to search for an astronomical site at eh Teide Observatory, renouncing better paid offers of work, how astrophyiscs teaching was first introduced in the University of La Laguna, and how he ended up writing his thesis about the zodiacal light. This was to be the first of the 333 theses on the list of the IAC until today’s date. To sum up, his talk, as well as his book, discusses the how and the why: how things were carried out, how the initial dreams were born, and how the IAC was built up “ a constant adventure which reflects the major effort made during the Transition, also in science and technology, to win the incorporation of our country into modern life. “The story of what many of us, together, did as we walked”.

50 years “Dreaming about the stars” 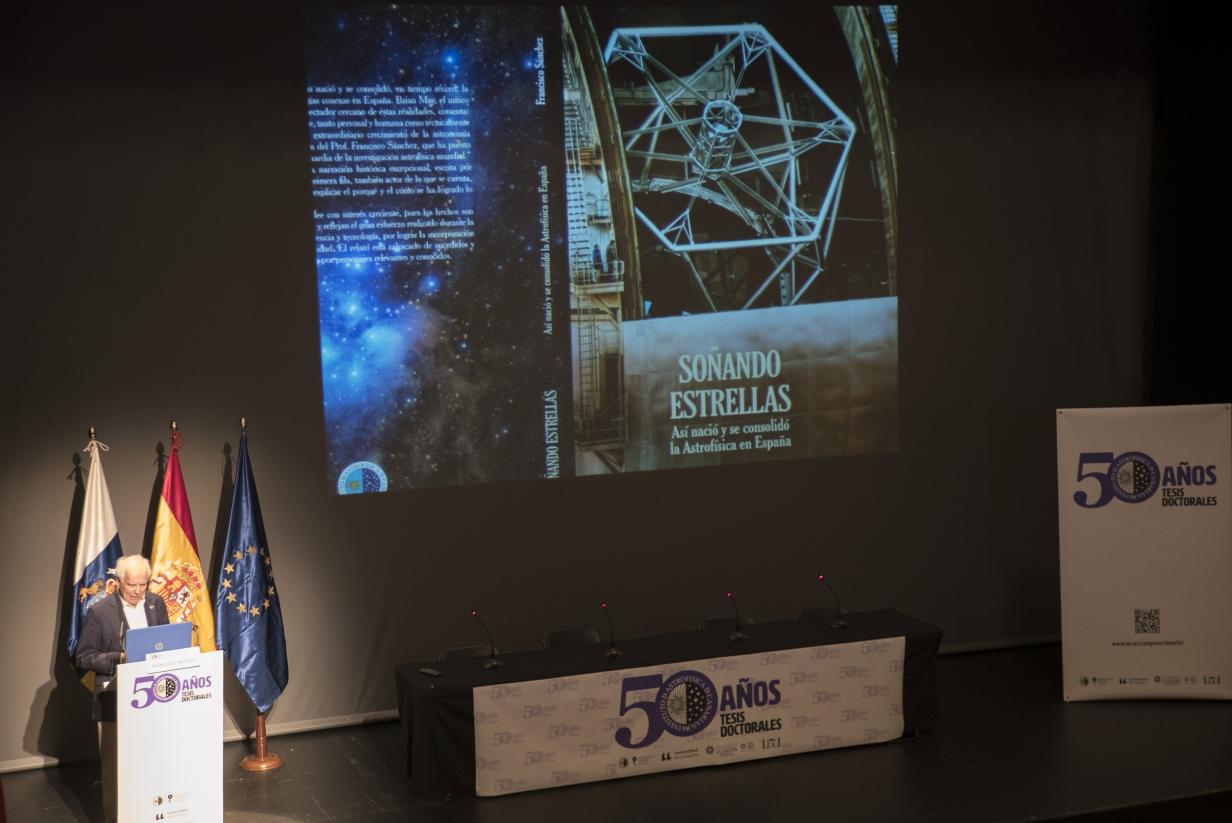