First evidence of the possible existence of graphene in space. 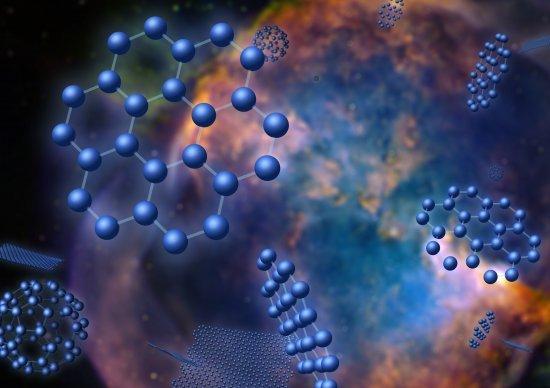 Image Caption: Artist’s impression of the graphenes (C24) and fullerenes found in a Planetary Nebula. The detection of graphenes and fullerenes around old stars as common as our Sun suggests that these molecules and other allotropic forms of carbon such a
Advertised on
01/01/2011
References
(2011) The formation of fullerenes: clues from new C60, C70, and (possible) planar C24 detections in Magellanic Cloud Planetary Nebulae, The Astrophysical Journal Letters, 737, L30

Nobel-prize winning scientists (2010), Andre Geim and Konstantin Novoselov, synthesized graphene in the laboratory in 2004. Just seven years later, this material of extraordinary strength, thinness and elasticity may have been found in space. The first evidence of the possible existence of C24 - a flat two-dimensional molecule, one atom thick, possibly a "small piece of graphene - in space has been found. To confirm beyond a doubt that what has been detected is actually C24, laboratory spectroscopy would have to be carried out, something which is practically impossible with current laboratory techniques. Because of its high electrical and thermal conductivity, graphene has promising technological applications, such as the manufacture of new materials and advanced electronic devices (computers faster than those with silicon transistors, screens on electronic devices, solar panels, etc.). The properties of graphene (transparency, thinness, possibility of developing materials 200 times stronger than steel from it) have continued to raise expectations of its becoming the material of the future.

In this study, which used NASA's Spitzer telescope, C60 and C70 fullerenes have also been detected in ten planetary nebulae - remnants of stars like the sun, towards the end of their lives - in two galaxies near the Milky Way, the Magellanic Clouds. Also, the first extragalactic detection of the fullerene C70 has been achieved.

The detection of fullerenes and graphenes around old stars as common as our Sun, indicate that these molecules and other allotropic forms of carbon such as nanotubes, nanodiamonds, carbon onions, etc. may be ubiquitous in space and that the basic physical processes needed for life to originate could be more common than we thought, suggesting that life could be created anywhere in the Universe. The most likely explanation for the fullerenes and graphenes generation is that these complex molecules form from the shock-induced decomposition of hydrogenated amorphous carbon grains (HACs), which should be very abundant in the circumstellar shells of these dying stars.