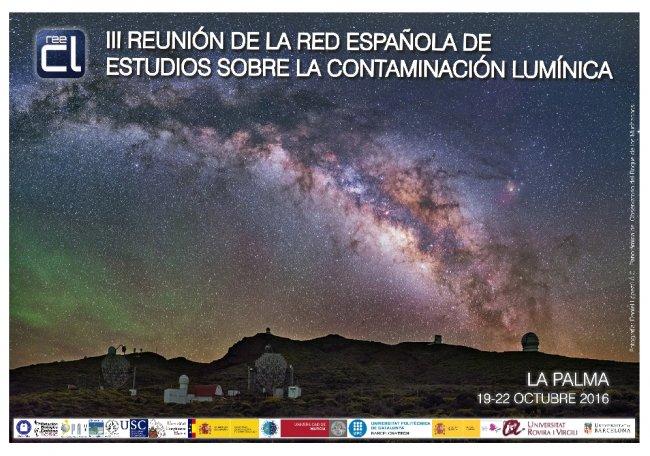 The Instituto de Astrofísica de Canarias (IAC) will participate in the third meeting of the Spanish Light Pollution Research Network (Spanish acronym REECL), which will be held on the Island of La Palma between 19th and 21st of October. Its objective is to foster the interchange of experience in the different areas of this subject, and to help work out plans for research into light pollution. The meeting will feature researchers who are studying the effects produced by artificial night-time lighting in Spain.

Light pollution is a high impact environmental, economic and social problem. The IAC has been aware of the need to promote initiatives to characterize and protect the Canary Island Observatories. For this purpose it has built up a Sky Quality Group,  which continuously monitors the parameters which determine the astronomical quality of these observatories, and has set up the Sky Quality Protection Technical Office(Spanish acronym OTPC) in order to facilitate the application of the Law for the Protection of the Astronomical Quality of the Observatories of the IAC (popularly known as “the Sky Law”) and to safeguard the astronomical quality of these observatories against three possible types of pollution (light pollution, atmospheric pollution, and contamination by radio waves), as well as against the airline  routes.

The basic aim of the REECL is to set up a network uniting the researchers who study light pollution in Spain. For that reason, the meeting is aimed essentially at research personnel, both established researchers and researchers in training, of the groups forming the network, although there will be invited participation by members of other Public Research Entities, and socially active groups who may be interested.

The agenda of this, the third meeting of the REECL is:

The IAC was one of the promoters of the International UNESCO Conference “Starlight 2007” in defence of the quality of the night sky and the general right to observe the stars, open to participation by all those scientific, cultural and civic organizations related to the protection of the heavens. The main objective of the Starlight Foundation is astronomical outreach and the promotion and management of the Starlight movement via a system of certificates which can be awarded to any space which has excellent sky quality and is an example of protection and conservation. In addition, at the end of 2015 the STARS4ALL platform was born, a European project involving the IAC, within the Horizon 2020 Programme, whose aim is to encourage citizens to act in preservation and care of nocturnal landscapes in Europe, and to warn of the many environmental problems produced by light pollution.