A research team at the Instituto de Astrofísica de Canarias (IAC) has observed an unusual type of emission in a sample of local galaxies which could indicate the presence of accretion discs around intermediate mass black holes (IMBH). The discovery would multiply by five the numer of known IMBH and opens a new way to detect and study this mysterious class of astronomica objects. Although only a few are known, via indirect evidence, the IMBH are a key to understand the formation of supermassive black holes and the galaxies which harbour them.

The IMBH is a type of black hole whose mass is between one hundred and one million solar masses. That means that they are more massive than stellar black holes, but less massive than the supermassive ones. Researchers have looked for them for decades. Although only a few have been detected, they are fundamental to our undestanding of a large number of very relevant astrophysical questions.

These objects provide the seeds of grown of the supermassive black holes, huge objects with masses which are millions of times the mass of the sun, and are found in most galactic nuclei. Studying their proerties and their interaction with the medium which surrounds them is also relevant for understanding how the first galaxies formed. Furthermore, they are the end products of the mergers of the black holes which have been detected via their emission of gravitational waves.

Although many astronomers think that the IMBH must be very abundant in the universe, they are very difficult to observe. Now a study by the ESTALLIDOS research group at the IAC appears to have found them in considerable numbers. The team has found a new way to detect them. This unexpected find surprised the researchers while they were looking for the cosmological gas which falls into galaxies and which allows them to form stars continuously.

“While looking for something else, we found weak emission produced by clouds of hydrogen around a number of local galaxies (118 emissions around 56 galaxies). Instead of having only a single peak, the emission line was double, which is very unusual” explains Jorge Sánchez Almeida, an astrophysicist at the IAC, co-Principal Investigator of the ESTALLIDOS group, and first author of the article, “After analyzing all the possible explanations (bubbles, jets, supernova shocks, galactic winds, intruders, etc.) we concluded that only accretion discs around IMBH could explain what we had observed” he adds.

This finding is a great step forward in research on this type of objects which are a key to understanding the structure and the evolution of the universe. “If this result it confirmed we would have mutliplied by five the number of known IMBH’s, and we would have found a way to detect and study these elusive IMBH’s” states Casiana Muñoz Tuñön, an astrophysicist who is the Deputy Director of the IAC, and co.IP of the ESTALLIDOS group.

“We have given our soul and our eyes looking for weak signals in noisy images” explains Joao Fose Fejo Calhau, a postdoctoral researcher at the IAC, and a co-author of the article. “We estimate that we have dedicated the equivalent of twenty 8 hour working days without stopping to inspect a sample of 164galaxies” he points out.

The data for the study were taken with the two-dimensional spectrograph MUSE on the Very Large Telescope (VLT) at the European Southern Observatory (ESO) in  Chile. “MUSE is unique” notes Ana Luisa González Morán, a postdoctoral researcher at the IAC, and a co-author of the article. “There is nothing like it on any other telescope. The signals detected could not have been discovered with another instrument.”

In future research the team hopes to be able to confirm that the signals come unquestionably from this type of objects. “The field we have observed is a cosmological field with much archival information available. We have looked for objects in these catalogues which correspond to our objects, with partial success, so we are awaiting new data of this region obtained with MUSE and with the James Webb Space Telescope” concludes Jose Miguel Rodríguez Espinosa, researcher at the IAC and the Instituto de Astrofísica de Andalucía (IAA, CSIC) who has also participated in the study. 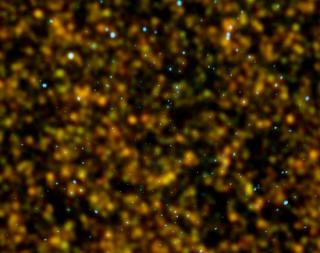