The return of the Geminids 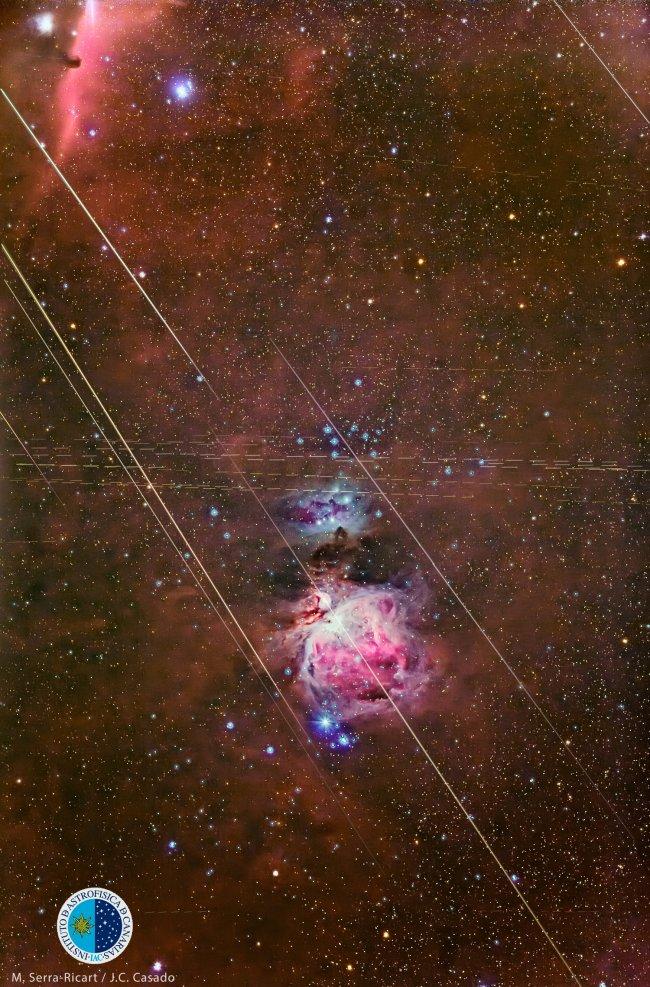 Image obtained from exposures taken between 0:50 and 05:10 UT on 14th December 2014 from the Teide Observatory (Instituto de Astrofísica de Canarias, IAC), at the point of maximum activity of the Geminids. The field is centred on the Orion Nebula (M42), w
Advertised on
11/12/2015

The collision of tiny fragments of comets or asteroids with the Earth’s atmosphere produces a magnificent spectacle, which is formally called a meteor shower, (or more popularly, and incorrectly, a shower of shooting stars). Around the year a number of meteor showers occur of which the brightest are the Perseids, the Geminids, and the Quadrantids, which can be seen from Europe and which yield high rates of meteors, (of order 100 shooting stars per hour or more).

During this year, 2015, the activity of the Geminids will occur between 4th and 17th December. The maximum rate is expected at around 18:00 UT on 14th December. So in Europe on the night of 14th to 15th December, especially just after sunset on 14th will be the best time to observe them (on the previous night, especially during the small hours of the 14th there should also be many Geminids to observe).

The Moon, which will just be emerging from new, will not pose a problem for observing a large quantity of meteors (on average one every two minutues), some of them bright (even though their velocities of entry into the atmosphere are lower than those of the Perseids), in we are in a place with a dark sky and with a clear view to the horizon.

In the past two years the spectacle of the Geminids was not disappointing (see images 1 and 2). Last year, with a rate which at times went over 150 meteors per hour (ZHR, the rate per hour at the zenith, see Gemínids 2014) the Geminids were, for yet another year, the most spectacular meteor shower of the year, showing greater activity than the Perseids (see Perseids 2014).

A unique type of shower

The so called “shooting stars” are in fact small dust particles of different sizes, some of them smaller than grains of sand, which drift away from comets while these are orbiting the Sun. The resulting stream of particles (known as meteoroids) are warmed by the solar heat, and disperses around the orbit of the comet. This orbit is crossed by the Earth once a year as it orbits the Sun. During this encounter the dust particles disintegrate while entering the Earth’s atmosphere at high speed, producing the well known streaks of light which are called, scientifically, meteors. This scenario is valid for the majority of meteor showers, but not for the Geminids; there is no known comet whose orbit coincides with the trajectory of this dust cloud.

The origin of the Geminids was a bit of a mystery until the STEREO solar probes of NASA confirmed the presence of a small tail to the asteroid 3200 Phaeton (during its closest approach to the Sun, known as its perihelion, see Lewitt, Li & Agarwal 2013) which is the only object moving along the same orbit as the cloud of meteoroids which gives rise to the Geminids. From that time, Phaeton 3200 became known as a “rocky comet”. A rocky comet is an asteroid which passes so close to the Sun that it forms a tail due to the break-up of its surface, caused by the difference in temperature between its day side and its night side (which can reach as much as 1,000K). The perihelion distance, q, of Phaeton is only 0.14 AU (astronomical units) which is 21 million kilometres, (the minimum distance of Mercury from the Sun is 46 million km).

On the sky-live.tv website the meteor shower will be broadcast directly from Tenerife, La Palma, Fuerteventura (Canary Islands) and Cáceres (Extremadura)

From sky-live.tv we are proposing that you make a wish on each meteor which you see passing through the atmosphere, just as our ancestors used to do. Now more than ever we need good resolutions (for the new year).

You can send us your wish in the form of a video or text to the hashtag #UnaEstrellaUnDeseo #WishonaStar at @sky-live.tv.

Observations of the Geminids will be used to develop a number of Educational Activities aimed at secondary school students (more information on astroaula.net) Among these we should point out a set of calculations included in the Actividad de la Lluvia (Activity of the Meteor Shower) based on visual observations.

The Teleférico del Teide (Tenerife Cable Car) and SECAT (The Society for the Study and Knowledge of Astronomy in Tenerife) will participate in the observation and broadcasting of the Geminids from the top of Mount Teide (Tenerife).