SANTI CASSISI: “Our new library of stellar models will be made publicly available at the whole international scientific community via the web page of the IAC” 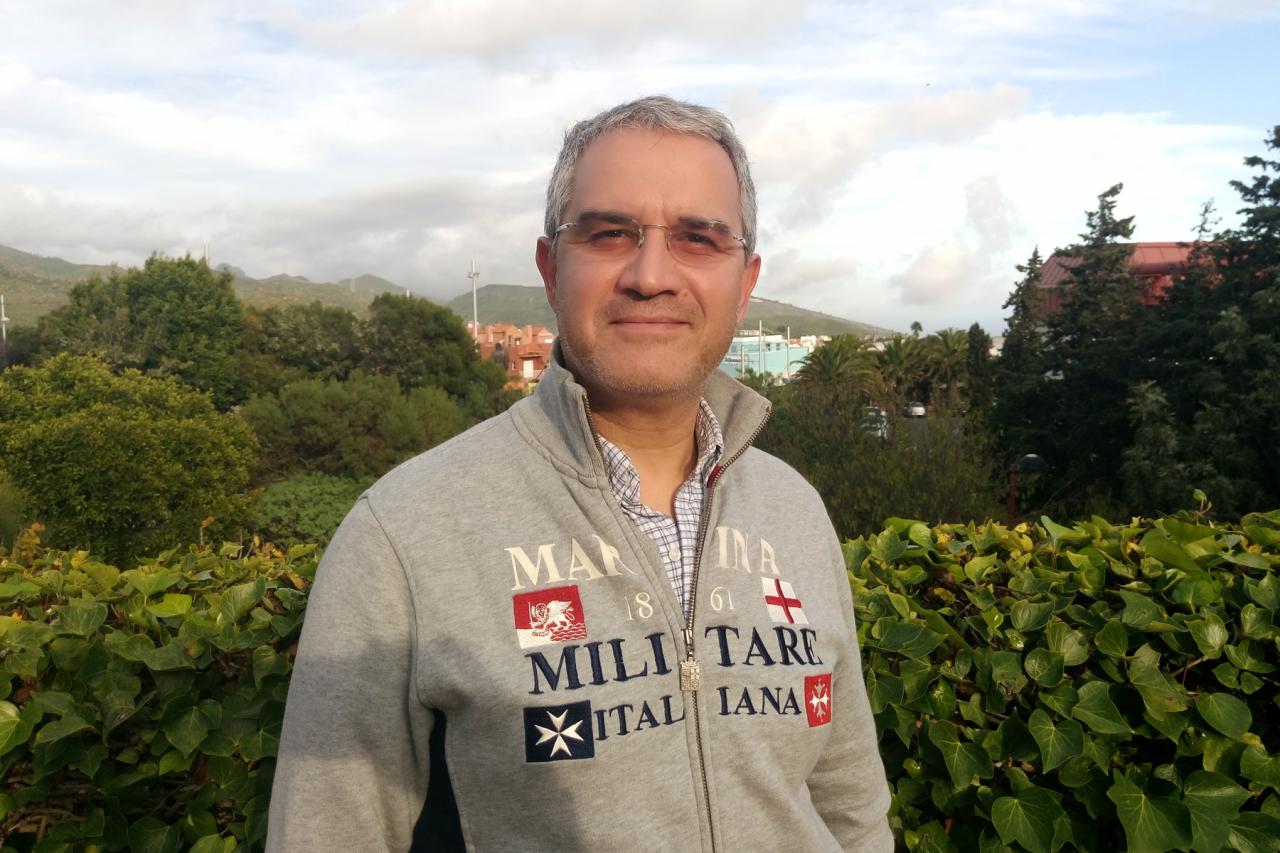 Santi Cassisi during his stay at the IAC. Credit: Sebastián Hidalgo (IAC).
Advertised on
10/03/2017

Is it possible to know how stars formed billions of years ago? Santi Cassisi, a staff researcher at the INAF - Teramo Astronomical Observatory (Italy) since 1998, is convinced of this. He studies the evolutionary and structural properties of the stars, both of galactic and extragalactic populations, to elaborate theoretical stellar models. With them, he has been developing for more than ten years a new library that will be available to the entire international scientific community. This projects, in collaboration with the IAC, has recently brought him to this center, within the Severo Ochoa program that fosters collaboration between leading research institutions.

Question: What are your interests in Astrophysics?

Answer: Since the beginning of my career I have been working on theoretical stellar evolution, and in particular in the computation and analysis of the evolutionary and structural properties of stars in a wide mass range and chemical composition. These stellar models have been applied for the study of both galactic and extra-galactic stellar systems. Concerning galactic stellar populations, I am involved in the study of multiple stellar populations in galactic globular clusters, and for this analysis I contributed in developing the needed theoretical framework requested for interpreting the various, peculiar, observational features of the various sub-populations. As far as it concerns the extra-galactic stellar systems, since more tan 10 years I am involved in a strong scientific collaboration with colleagues of the IAC as Sebastian Hidalgo, Carme Gallart, Antonio Aparicio and Matteo Monelli, devoted to the study of the Star Formation History in Local Group dwarf galaxies.

Q: Some astronomers like you study stellar populations to know more about galaxies. What role does star formation play in their evolution and formation?

A: The possibility to retrieve an accurate and reliable Star Formation History (SFH) of galaxies and, in particular, of Local Group (LG) galaxies, is a quite important achievement for several astrophysical topics. Just to mention an important topic, the possibility to derive an accurate estimate of the SFH –also at early times– of LG dwarfs and to correlate its properties with the global properties of the galaxy, such as its position within the LG and its gas content, is a crucial step for understanding the possible impact of reionization, as well as for testing the possibility that their SFH is influenced by environment effects such as dynamical interactions with more massive galaxies as M31 and/or the Milky Way. Indeed, the stellar population group at IAC has developed state-of-the-art population synthesis tools for retrieving the SFH of resolved stellar systems; so the combined use of these outstanding tools with accurate and complete sets of stellar models (that is the main aim of my research work) is a fundamental step for retrieving reliable SFH of resolved stellar populations in various environments.

Q: During previous visits to the IAC until the present time, you have been collaborating with Dr. Sebastián Hidalgo in a new stellar evolutionary library that will represent a significant extension and improvement with respect to the currently used BaSTI library. What is that library about and what is the purpose of that tool?

A: As I mentioned before, the availability of an accurate and extended library of stellar models is a crucial ingredient for a variety of astrophysical investigations as the study of the SFH in resolved stellar systems. I contributed to build about 10 years ago an important library of stellar evolutionary predictions named BaSTI (Bag of Stellar Tracks and Isochrones). However, stellar model libraries have to be updated as a consequence of improving in the physical framework we use for computing stellar models. So, in these last years, myself and Dr. Sebastian Hidalgo, with the contribution of Prof. Antonio Aparicio, started an ambitious project –funded by the Severo Ochoa grant– aimed to realize a new library of stellar models based on the most updated physics currently available and quite extended in mass range and chemical composition. The realization of such a new library has requested a huge effort not only in terms of computational time, but also in terms of work devoted in updating the physical inputs and the numerical evolutionary code. The contribution provided by Sebastián Hidalgo has been fundamental, as testified by the fact that he is leading the first paper presenting the library that we are going to submit.

This library will be made publicly available at the whole international scientific community via the web page of the IAC. The new library will be very useful not only for the group at IAC working on resolved stellar populations but also for the groups working on unresolved stellar populations as well as that working on massive stars –actually we plan to start a project with Prof. Artemio Herrero for extending the library to the regime of massive stars. Needless to say that the possibility for the IAC to offer to the international scientific community this tool will be a very valuable –in terms of citations and starting of new research collaborations-  opportunity of the institute.

Q: Contrary of what it is classically predicted, there is evidence that globular clusters host more than one stellar population with different chemical composition. What are the implications of different types of stars in a globular cluster? What is still missing in this field?

A: The discovery of multiple stellar populations in Galactic Globular Clusters (GGCs) is one of the most important discovery of Astrophysics of last decade. This evidence severely challenged our idea of GGCs as the prototype of Simple Stellar Population, a fundamental concept in stellar astrophysics. Being considered as the best example of simple stellar populations, GGCs have been extensively used as a benchmark for both stellar evolution and population synthesis models; since now we know that this assumption is no longer valid we need to change our approach in validating this kind of models. More importantly, we still lack of a clear understanding of how these stellar systems formed, and what was the sequence of events that leaded to the formation of distinct stellar sub-populations.

Q: What other projects are you currently involved?

A: In collaboration with colleagues of the IAC, I am involved in several projects aimed to study the SFH of both Local Group dwarfs and ultra-faint dwarfs. In the same time, mainly in collaboration with Sebastián Hidalgo I am working in the developing the stellar evolutionary framework needed for retrieving the SFH of various stellar fields in the galactic disk and bulge observed within the VISTA project. In addition, as I mentioned before we are looking at various possible “extensions” of the new stellar model library. I am also the co-director, together with Dr. S. Hidalgo, of the IAC doctoral thesis of Margherita Bettinelli; a thesis focused on the study of some dwarf galaxies, satellites of the Milky Way.