An international scientific collaboration, in which the Instituto de Astrofísica de Canarias (IAC) participates, has discovered two new super-Earths orbiting a bright red dwarf star only 33 light-years away. Both objects are among the closest-known rocky planets yet found outside our solar system. The results are presented today at the American Astronomical Society (AAS) meeting in Pasadena (California, USA).

Two new exoplanets, HD 260655 b and HD 260655 c, have been detected using NASA's Transiting Exoplanet Survey Satellite (TESS), a space telescope designed to look for planets in orbit around nearby bright stars using the transit method. This method measures the minute decrease of the brightness of a star as the planet crosses the stellar disk as seen from the telescope.

Research has determined that both planets are super-Earths, terrestrial worlds like ours, only bigger. Planet b is about 1.2 times as big around as Earth, planet c 1.5 times. In this case, however, neither world is likely to support life. The temperature on planet b, nearest to the star, is estimated at 435 °C,, planet c 284 °C.

According to research, both planets rate in the top 10 candidates for atmospheric characterization among all terrestrial exoplanets so far discovered. “That places them in the same category as one of the most famous planetary systems: the seven roughly Earth-sized planets around a star called TRAPPIST-1”, says Rafael Luque, researcher at the of the Institute of Astrophysics of Andalusia (IAA-CSIC) and also of the University of Chicago.

These and other rocky exoplanets are already on the list of observational targets for the James Webb Space Telescope, soon to deliver its first science images. This telescope could capture data from the star’s light shining through these planets’ atmospheres. Such light can be spread into a spectrum and reveal the fingerprints of molecules within the atmosphere itself, which can detect water, carbon and other components essential for life.

To confirm the existence of the two new planets, in addition to the observations made by TESS, the scientific team has also used ground-based instrumentation, such as the CARMENES spectrographs at Calar Alto Observatory (Almeria, Spain) and HIRES at the W. M. Keck Observatory (Mauna Kea, Hawaii). These instruments measured the “wobble” of the star, caused by the gravitational tugs from orbiting planets (radial velocity), which yields the planets’ mass. Combining these measurements, it has also been possible to determine the density and confirm that they are rocky worlds.

Although scientists do not yet know whether either of the two super-Earths possesses an atmosphere and, if so, what it is made up of, the joint data from the different observational studies suggest that they are not extended, hydrogen atmospheres. But for the scientific team, it is only an intriguing clue that encourages further research. “Learning more about the atmospheres of rocky planets will help scientists understand the formation and development of worlds like our own” concludes Luque.

The work has been accepted for publication in the scientific journal Astronomy & Astrophysics. From the IAC, researchers Víctor J. Sánchez Béjar, Enric Pallé, Giuseppe Morello and Jaume Orell have collaborated in the study. 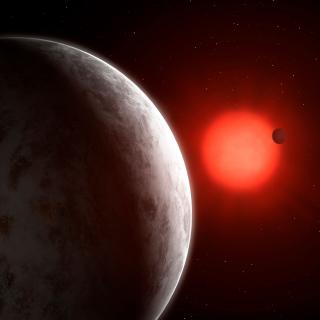 The exoplanets closest to us offer the best opportunities to make a detailed study of their physical properties, including the search for life outside the Solar System. In research led by the University of Göttingen (Germany), in which the Instituto de Astrofísica de Canarias and the University of La Laguna (ULL) are participants, has detected a system of superearths in orbit round the nearby star Gliese 887 (GJ 887), the brightest red dwarf in the sky. The results are published today in the journal Science. Superearths are planets with a larger mass than the Earth, but substancially less 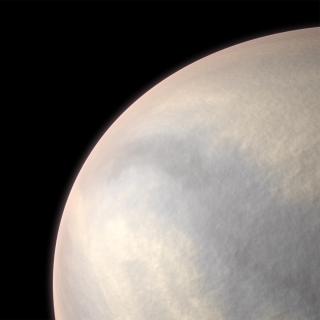 During the past 25 years astronomers have discovered a wide variety of exoplanets, made of rock, ice and gas, thanks to the construction of astronomical instruments designed specifically for planet searches. Also, using a combination of different observing techniques they have been able to determine a large numher of masses, sizes, and hence densities of the planets, which helps them to estimate their internal composition and raising the number of planets which have been discovered outside the Solar System. 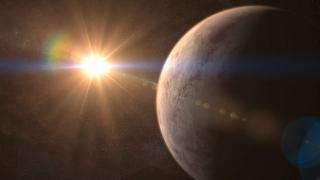 Its short orbital period could help with future studies of biological activity.