Zoom-in on the Cosmic Seahorse in visual and near infrared light. The foreground giant elliptical galaxy, at the center of a galaxy cluster, magnifies and distorts the distant light coming from the strongly lensed galaxy. Credit: ESA/Hubble
Advertised on
21/12/2021 - 11:00
Authors
SCIENCE COMMUNICATION AND OUTREACH UNIT
References
Artículo (ApJ Letters): "Milky Way–like Gas Excitation in an Ultrabright Submil…

An international team, including researchers from the Instituto de Astrofísica de Canarias (IAC), used combined data from different radio telescopes located in Spain to probe the mode of star formation in a galaxy when the universe had less than 30% of its current age. They revealed that the properties of the molecular gas reservoir are similar to the one of our own Galaxy, unseen up to now in the distant universe. The paper is published in the Astrophysical Journal Letters.

A major question in the study of galaxies is on the mode of star formation, how efficient the conversion of cold gas into stars is. Up to now, galaxies in the early universe seem to form stars in a different manner than observed in our own Galaxy which is puzzling. To shed light onto this question, the cold molecular gas, the fuel for the formation of stars, gets observed with radio telescopes.

Due to the physical properties of the molecular hydrogen gas (H2), it cannot be observed directly in the radio regime but it can traced via the carbon monoxide molecule (CO). And that is what the team led by Nikolaus Sulzenauer, a PhD student at the Max Planck Institute for Radio Astronomy, has done.

First, the researchers selected a galaxy whose brightness is boosted through gravitational lensing by an intervening cluster of galaxies. They then searched for archival data of infrared space missions in combination with the Hubble Space Telescope imaging.

“The discovered galaxy is strongly lensed by a factor of about 10 and thus its morphology is distorted resembling a seahorse. Therefore its nickname is the Cosmic Seahorse" explains Sulzenauer, who carried out this study as a master’s thesis at the University of Vienna under the supervision of IAC researcher Helmut Dannerbauer who is also co-author of the paper that is published in Astrophysical Journal Letters.

The researcher revealed the distance of this galaxy, the light travelled 9.6 billion years, through observations of the carbon monoxide lines with the 30 m radio telescope of the Instituto de Radioastronomía Milimétrica (IRAM) located in the Sierra Nevada. Together with observations of the Yebes 40 m radio telescope located at Yebes, 50 km north-east of Madrid and operated by the Instituto Geográfico Nacional (IGN), the physical properties of the fuel of star formation through the observations of several molecular gas lines could be derived as well.

“That it is the most distant galaxy detected with the Yebes 40 m radio telescope up to now” notes Dannerbauer, who also highlights the advantage that the method used in the research has brought to these radio telescopes: "The gravitational lensing virtually transforms the IRAM and Yebes telescopes into radio telescopes with sizes of single dishes of 300 resp. 400 m, impossible to construct."

Through the analysis of the cold molecular gas, the researchers found the presence of previously unseen star-formation mechanism at cosmic noon, the peak epoch of star formation and black hole activity of the universe. “Our research has shown that this is a so-called main-sequence galaxy with slowly evolving star formation at the epoch of maximum star formation in the Universe" adds Bodo Ziegler from the University of Vienna and co-author of the article.

“This seems to be the missing link between systems with high and low star formation rate such as the Cosmic Seahorse” explains Anastasio Díaz Sánchez of the Universidad Politécnica de Cartagena who also participated in the study. Likewise, Susana Iglesias Groth, IAC researcher and co-author of the article, emphasises the relevance of this discovery considering the difficulty of studying this type of galaxy: “Without the gravitational lensing it would have been impossible to detect this galaxy, with calm star formation activity, with these large radio telescopes." 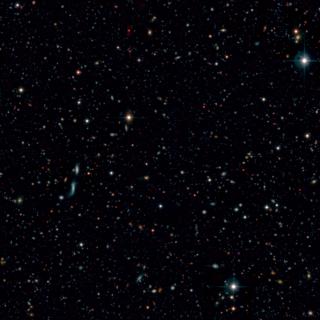 Galaxy evolution is a crucial topic in modern extragalactic astrophysics, linking cosmology to the Local Universe. Their study requires collecting statistically significant samples of galaxies of different luminosities at different distances. It implies the ability to observe faint objects using different techniques, and at different wavelengths 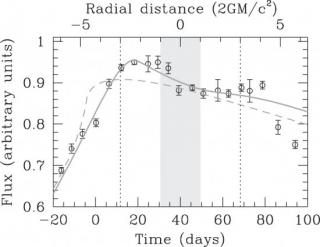 The one-way frontier around a black hole is the event horizon from which nothing can escape.  Close to it, strong effects of gravity and exotic physics are expected. The most massive black holes are at the centre of distant quasars, which cannot be resolved by telescopes. Fortunately, in some quasars aligned with an intervening galaxy, gravitational microlensing can magnify very small regions within the quasar allowing horizon scale resolution. We have used three events of gravitational microlensing that scan the source of a lensed quasar (Einstein Cross) to resolve a structure, affected by 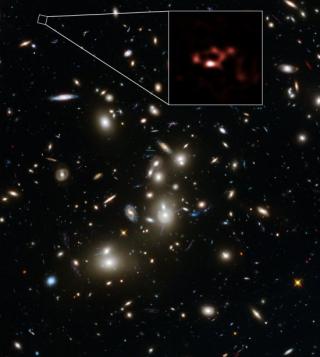 Research news
Discovery of interstellar dust in the reionization era of the Universe: ALMA observations of a z=8.38 galaxy amplified by the gravitational lensing effect of the galaxy cluster Abell 2744

The first billion years of cosmic history represents the final frontier in assembling a coherent physical picture of early galaxy formation, and a remarkable progress in this area has been made in the last few years. We have carried out a detailed analysis of a gravitationally lensed galaxy A2744_YD4 at z = 8.38 behind the massive galaxy cluster Abell 2744. The photometric redshift of about 8, estimated from HST, VLT and Spitzer data, was confirmed by the detection of the Ly_alpha line at a redshift of z=8.38 in a deep VLT X-SHOOTER spectrum. The follow-up observations with the Atacama Large 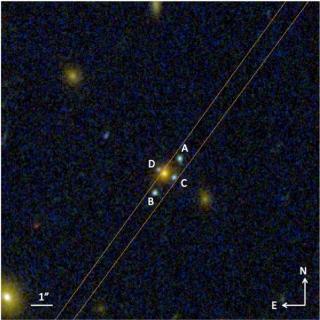 The study, which has combined images from the Hubble Space Telescope with spectroscopic observations from the GTC, has confirmed the existence of a new example of a gravitational lens, a phenomenon predicted by Albert Einstein's theory of General Relativity.