A Black Hole Nova Obscured by an Inner Disk Torus. 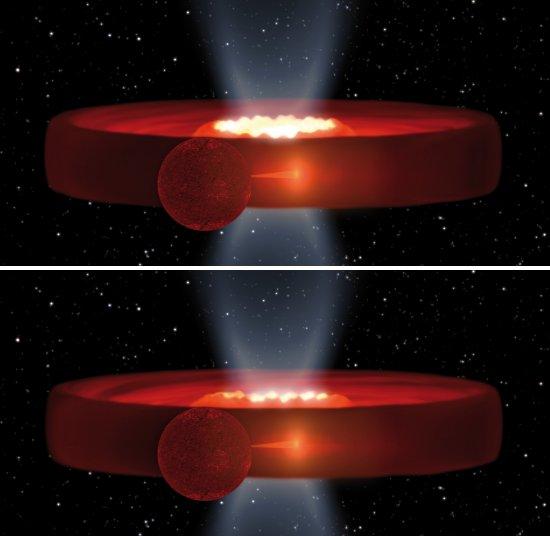 Stellar-mass black holes (BHs) are mostly found in X-ray transients, a subclass of X-ray binaries that exhibit violent outbursts. None of the ~50 galactic BHs known show eclipses, which is surprising for a random distribution of inclinations. Swift J1357.2−093313 is a very faint X-ray transient detected in 2011 by the Swift telescope. Our spectroscopic evidences show that it contains a BH in a 2.8h orbital period. High-time resolution optical light curves display profound dips of up to 0.8 mag (50% of the optical flux) in 2min without X-ray counterparts. The observed properties are best explained by the presence of an obscuring toroidal structure moving outward in the inner disc, seen at an extreme high inclination (almost edge-on). This torus might be ubiquitous in other X-ray binaries and it was detected because the system is nearby (~1.6 kpc) and its high Galactic latitude (b=50º). Swift J1357.2-09333 could be the prototype of an hitherto missing population of Galactic BHs with extreme inclinations that, if unveiled, will render the most accurate masses of stellar-mass BHs.