CLASP, a pioneering project to study the magnetic field of the solar chromosphere. 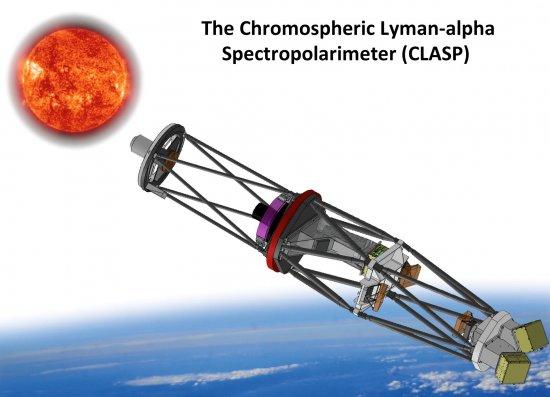 Next week, on Thursday September 3rd the CLASP (Chromospheric Lyman-Alpha SPectropolarimeter) experiment will be performed from a NASA sounding rocket. This is a pioneering project which will measure for the first time the polarization of the emission in the Lyman-alpha hydrogen line from the Sun. This experiment, motivated by theoretical research carried out at the Instituto de Astrofísica de Canarias (IAC), is an important means of exploring the magnetic field of the transition region between the chromosphere and the corona of the Sun, one of the most enigmatic regions of the solar atmosphere. Among the questions to be answered by the astrophysicists is why in this region the temperature shoots up by hundreds of thousands of degrees in barely 100 km and the plasma goes from a partially ionized to a fully ionized state.

This innovative exploratory experiment will be carried out from a NASA sounding rocket carrying an ultraviolet telescope, a spectrograph, and a polarimeter. The instrument will be launched from the White Sands missile test range (New Mexico, USA) and will have an observing time of only five minutes to detect the linear polarization signal. “We will try to estimate the magnetic field in this transition region on the Sun“ says Javier Trujillo Bueno, CSIC Research Professor at the IAC and one of the four Principal Investigators on SLASP, “by theoretical modelling of the observed polarization, which implies making numerical simulations on supercomputers of the process of generation and transport of the polarized radiation in realistic models of the solar atmosphere”.

The CLASP project was presented to NASA in 2012 by a research team led by the USA, Japan, France, and Spain. The proposal was the only one selected following an international competition, against many other proposals.

The Spanish participation incorporates scientists of the Solar Physics Group at the IAC: This group, which is funded by the Spanish national project “Solar Magnetism, and Spectropolarimetry in astrophysics” has (along with researchers in the project who now work in the Czech Republic and in Switzerland) provided the theoretical basis, and the plasma diagnostics techniques needed to predict and interpret the polarization of the Lyman-alpha line of hydrogen. Norway has contributed with magnetohydrodynamical models of the solar atmosphere. Japan has provided the telescope and polarimeter, using a French diffraction grating. The USA has contributed the CCD camera, and the NASA Sounding rocket.

The plasma in the solar atmosphere extends from the photosphere, relatively thin and “cold” (with a temperature of 5,800 degrees celsius) to the tenuous and extremely hot corona (one million degrees), whose plasma reaches out to the limits of the solar system.

Between the two are situated the two most mysterious regions of the solar atmosphere, the chromosphere, where the temperature rises by several thousand degrees compared to the photosphere, and the transition region, where, in Barkly 100 km the temperature shoots up by hundreds of thousands of degrees, and the plasma goes from partly to totally ionized.

How it comes about that at only some 3,000 km above the relatively cool photosphere the temperature of the plasma at the base of the corona rises to a million degrees is one of the major mysteries in astrophysics. Just about the only known aspect is that the magnetic field is somehow involved, and plays a crucial role. Furthermore, the magnetic field is the cause of the many complex plasma structures observed in the solar atmosphere, (e.g. sunspots, coronal prominences, chromospheric spicules) and of their dynamics. For these reasons it is necessary to infer and characterize the magnetic field in order to understand how the Sun works.

How is empirical observation about the magnetic field in the upper chromosphere and the transition region obtained?

1. Identifying spectral lines and the properties of their radiation which are sensitive to the magnetic field in those regions of the solar atmosphere.

2. Developing plasma diagnostic techniques which allow us to derive the properties of the field using the observed radiation.

3. Constructing the telescopes and instruments required to measure the radiation from the chosen spectral lines.

The radiation produces in the outer regions of the solar atmosphere is main in the ultraviolet range of the solar spectrum, which can only be observed from outsider the Earth’s atmosphere (more than 200 km above sea level). However the radiation intensity is not sufficiently sensitive to the magnetic field.

The theoretical research carried out at the IAC by the astrophysicists Javier Trujillo Bueno, Jiri Stepan, and Luca Belluzzei, based on the quantum theory of radiation arrived at the following conclusions:

1. The scattering process in the transition region of the solar atmosphere should produce signals of linear polarizatio0n in the Lyman-alpha emission line of hydrogen. The predicted polarization signals are very weak, but they can be measured with an ultraviolet telescope and a high resolution spectropolarimeter outside the terrestrial atmosphere.

2. Via the Hanle effect, these linear polarization signals in the solar Lyman alpha emission are sensitive to the presence of magnetic fields in the solar transition region, with good sensitivity to fields between 10 and 100 gauss. The Hanle effect is the modification of the polarization produced in a spectral by scattering processes in the presence of a weak magnetic field.

When the research which gave rise to the proposal to NASA were carried out, the Spanish team was made up of the following scientists of the Solar Physics Group of the IAC: Javier Trujillo Bueno (Research Professor of the CSIC in the IAC and one of the four principal investigators on the CLASP experiment), Jiri Stepan (who was a post-doc at the IAC in 2011, presently working at the Ondrejov observatory in the Czech republic), Luca Belluzzi, (who was a post-doc at the IAC in 2011 and is now working at the Istituto Ricerche Solari Locarno, in Switzerland), Andrés Asensio Ramos (Ramón y Cajal researcher at the IAC), and Rafael Manso Sanz (post-doc at the IAC until 30th June 2015).