"Preserving the Skies" closes with a call for help from the main entities related to the protection of the night sky.

After a panel discussion about technical aspects featuring some of the participants in the conference, the author from La Palma Elsa López read out (between two musical performances) the resolutions adopted at this conference held to celebrate the 10th anniversary of the Starlight Declaration of La Palma (see RESOLUTIONS below).

“The Preserving the skies conference has been an interesting and fruitful meeting” said Francisco Sánchez, the founding director of the Instituto de Astrofísica de Canarias (IAC). ”I am very satisfied, he said, because during these 10 years there have been advances. Here on the island of La Palma we reached conclusions which became the well-known Declaration of La Palma, which triggered the international Starlight movement not only in favour of dark skies, which are a necessary condition, but above all in favour of enjoying the stars”

Rafael Rebolo, the director of the IAC, gave thanks to La Palma for all its contributions to astrophysical research. “Protecting the skies of the Island” he stressed “is something for which we all work, and hope to be united. Dark skies have cultural, and socioeconomic advantages, help in developing tourism, and give health benefits”. And he added “We hope to keep on working together for many years for the values we share”.

Yolanda Perdomo, representing the World Tourist Organization (WTO), explained that a few years ago a new working group was started, that of scientific tourism, and the specific field of astrotourism because one of the members of the WTO, the Starlight Foundation, had requested this. “As a Canary Islander” she said, “I think it is wonderful that a Canary organization is responsible for this movement”

Silvia Torres-Peimbert, the president of the International Astronomical Union (IAU) an organization with 12,000 members in 7 countries, explained that the mission of the IAU is to promote astronomy in all of its disciplines and facets. “During 2009, the International Year of Astronomy, a highly successful event which reached over 800 million people world-wide, we realized how important is our speciality for the general public” and she continued “ We have made a big effort to get closer to young people. We are convinced that astronomy is a motor for technological and economic development. And a meeting like this opens new perspectives for the IAU.

Nuria Sanz, the representative of the UNESCO said that she was grateful for the confidence shown by the world of science towards this intergovernmental organization to maintain its support for the role of astronomy in favour of improving international cooperation. “What has occurred here now, and 10 years ago,” she said “has served to identify many necessities in the way we need to keep our activity going. In the first instance, we need to communicate better. The media are allies we need. We realize that humanity’s common landscape is the sky. And secondly what we need to do is to keep on with our relationship to ECOSOC and to ensure that the agencies of UNESCO understand that astronomy is important and belongs to everybody. This is not a problem, it is a challenge, and a proposal” She ended her speech saying “Since I was above the clouds yesterday I have been dreaming” in reference to her visit to the Roque de los Muchachos Observatory.

In his speech, and before the Reading of the Resolutions of the Conference, the President of the Cabildo of La Palma Anselmo Pestana, directed his words to the presentation of the author Elsa López, who was about to read the official closing document. “Elsa López” he said, “is many things, among them a person with the closest links to the Island. She has won many prizes, among them the Gold Medal of the Canaries. She is someone of whom we feel proud, above all because she maintains her links with our island which nothing can erase”

Anselmo Pestana continued his speech by thanking all the participants for their presence in La Palma with these words:

“Good day. La Palma has again been the great champion of the defense of the quality of the night sky and the right to observe the stars, by celebrating during this week the tenth anniversary of the Starlight Declaration with many activities throughout the island

Ten years ago we put our weight behind a declaration with keeps going, which maintains its relevance and which we have the honour and pride to have promoted in the benefit of a magnificent and exceptional quality of our land: to be one of the best places on the planet for observing the heavens.

We have the right to continue to enjoy the exceptional quality of our clear night skies, as well as the obligation to preserve the right to observe the stars, by keeping a tight control of our light emission, which benefits not only the scientific work carried out from here, but also the proven advantages which an environment with clear skies can offer to human beings.

This conference “Preserving the Skies” has again given rise to manifestos at the highest level and with wide repercussions for the practical renewal and extension of the Starlight Declaration of 2007.

We have been able to listen to international experts, representatives of different institutions talking about the effects of light pollution, about sustainability, about astrotourism, about their countries of origin, sharing experiences and interchanging ideas.

The Starlight Declaration is a part of our particular make-up, which defines us as a territory and which makes other places in the world take notice of us as an example of people who look after their night sky for the observation of the heavens.

The symbolic electrical blackout in the 14 municipalities of the Island which will occur this evening is a perfect example of the values defended in the Starlight Declaration, as well as strengthening the values of unity and of effort.

All this is to maintain the validity of the unbreakable link which La Palma society, and the Instituto de Astrofísica de Canarias have with the cleanliness of our skies and the observation of the stars. With the aim of showing that this Island must keep being in the forefront, at world level, of a right which makes us grow, and excel as a society committed to its values”. 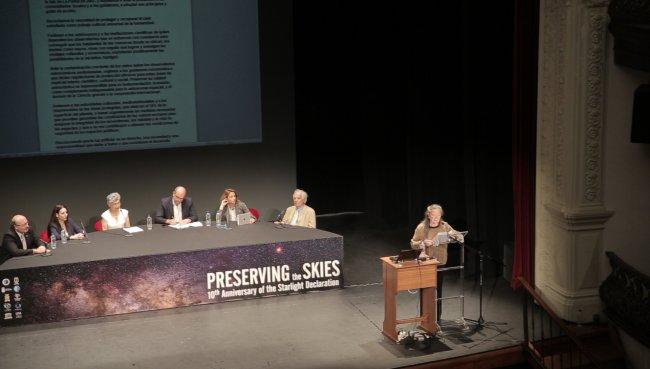