Research in the Canary Island observatories, main theme of the recent meeting of their International Scientific Committee

The International Scientific Committee (CCI for its Spanish initials) of the Canary Island Observatories offers the mechanism by which the institutions which are members to participate effectively in the decisión making which affects the operation of the telescopes. This morning the CCI has celebrated, in virtual form, the first of its two meetings per year, in which some thirty people took part.

Luca Valenziano, of the National Institute of Astrophyiscs of Italy (INAF) was the new President of the CCI at his 83rd meeting, at which Rafael Rebolo, the Director of the IAC was also present, as Vice-president; Oskar von der Lühe, representing the German Research Foundation (DFG for its German initials); Aurélie Marchaudon, of the National Institute for Sciences of the Universe (CNRS/INSU for its French initials) J. Miguel Más Hesse, from the Higher Council for Scientific Research (CSIC for its Spanish Initials), Seppo Mattila, representing the Finnish Academy of Sciences, Elena Terlevich, scientific advisor to the CCI; Colin Vincent, from the Science and Technologies Facilities Council of the United Kingdom, Chrirtoffel Waelkens, from the Catholic University of Leuven (KU Leuven) and Campbell Warden of the IAC, in his capacity as Secretary of this committee, as well as other scientific advisors and Directors of the institutions which are members of the Canary Island Observatories.

The subject which was the main point of the meeting was the assignment of observing time to the international programmes of the Canary Observatories. Of the seven proposals discussed three international projects were selected. Each of these involves groups of some 15 researchers, for which approval to use a major number of telescopes was granted. Over 50 researchers from 10 countries will have access to the Canary telescopes in the collaborative programmes approved. These research programmes cover a wide range of fields in astrophysics: the physics of galaxies and the hierarchical formation of dark matter halos, the project led by Jairo Méndez Abreu (IAC), the study of the internal structgure of planetary formation discs directed by Alessio Caratti (Dublin Institute for Advanced Studies) and studying potential sources of gravitational waves, led by Rubina Kotak (University of Turku, Finland).

The impact of COVID-19 on the working of the Canary Observatories was another subject discussed during the meeting, and it was decided to take actions designed to guarantee the continuity of the observations. In addition La Palma was chosen as the venue for the next meeting, with the presence of the members, which is planned for mid-November this year, circumstances permitting

The IAC Observatories are part of the network of Singular Scientific and Technical Infrastructures (ICTS) of Spain. 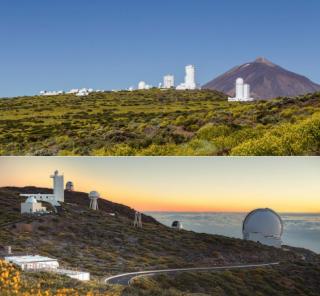