Rafael Rebolo, director of the IAC, and Nadia Calviño, First vice-president of the Spanish Government, and Minister of Economic Affairs and Digital Transformation, at a meeting in La Palma. Credit, Spanish Government
Advertised on
19/10/2021 - 09:31
Authors
SCIENCE COMMUNICATION AND OUTREACH UNIT

The first Vice-president and minister for Economic Affairs and Digital Transformation, Nadia Calviño, announced yesterday in La Palma her support for the project to improve the fibre optic connectivity of the island, with a planned investment of around 40 million euros from the European Union’s Recovery Plan.

The Vice-president of the Government Nadia Calviño, said “We are working to improve the fibre optic connectivity of La Palma, by investing a part of the European funds. It is a matter of reinforcing the role of the Canaries as one of the hubs of intercontinental connectivity and our aim is to be able to start in 2021 and make these investments”.

The project for improving the digital connectivity of La Palma, on whose design the Instituto de Astrofísica de Canarias (IAC) and the Secretaría de Estado de Telecomunicaciones e Infraestructuras Digitales (SETELECO) of the Ministry under Vicepresident Calviño have been working for several months, involves the development of new supporting trunk connectivity, giving redundancy both in the terrestrial portions as well as in the submarine cable which reaches the Island of La Palma.

The project, which will be carried out by the IAC in collaboration with the Cabildo of La Palma, will mean a big improvement in the services which the IAC offers to the scientific community, which will strengthen the position of the Canaries to attract new scientific infrastructures to the islands, such as the Thirty Meter Telescope(TMT), the Cherenkov Telescope Array (CTA) and the European Solar Telescope (EST).

More than 14 years ago the IAC was a firm driver of digital connectivity between La Palma and the outside world, and its own Centro de Astrofísica en La Palma (CALP) is the fibre optics node which presently links La Palma with Tenerife and with continental Europe through the RedIRIS network. These submarine infrastructures need renewal every so often to guarantee their service.

After several meetings between the IAC and STELECO, with the participation of RED.es which is in charge of RedIRIS (the academic network of Spanish research which currently provied advanced communications services to the IAC) a plan has been worked out to tackle connectivity needs, which will be developed in two phases which will be carried out in series.

In the first phase of the proyect a new length of submarine connection will be set up, independent of the existing link, with an alternative route for submarine cable between the islands of La Palma and Tenerife. In this way La Palma will have a duplicate infrastructure to protect against possible failures of submarine connectivity. In the second phase, in collaboration with the Cabildo of La Palma, terrestrial support routes will be made, using existing infrastructures on the island as far as possible, and developing any new routes as needed. 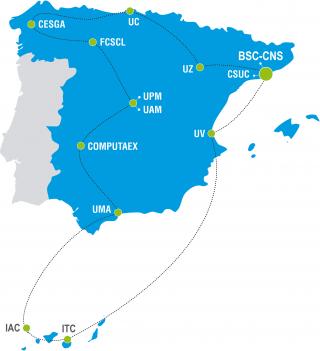 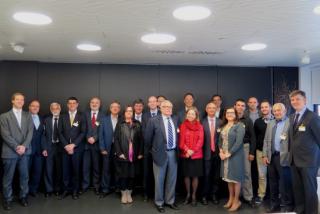