WEAVE is ready to start operating in La Palma

All the main components of the new multiobject spectrograph WEAVE on the William Herschel Telescope (WHT) in the Roque de los Muchachos Observatory (Garafía, La Palma) have arrived on the island. The Instituto de Astrofísica de Canarias (IAC) has played an outstanding role in the design and production of the parts of this instrument, the work of an international collaboration, which will start its commissioning after immediate integration on the telescope.

The WEAVE (William Herschel Telescope Enhanced Area Velocity Explorer) spectrograph, will widen the field of view of the telescope to two degrees on the sky, four times the apparent diameter of the Moon, which will allow it to observe up to a thousand astronomical objects at a time during night-time observations; these will be carried out for the next five years. It will also allow scientists to follow the sources observed in the Gaia space mission of the European Space Agency (ESA) and study objects from white dwarfs close to the Sun to the host galaxies of sources of gravitational waves.

Scott Trager, researcher at the Kapteyn Astronomical Institute, University of Groningen (The Netherlands) and project scientist on the WEAVE Survey Consortium expressed his satisfaction at reaching this important milestone: “WEAVE will give tens of millions of spectra of stars and galaxies during the next five years, and its survey will yield data which will help to answer questions such as the formation of the galaxies, including the Milky Way and its stars, and about the nature of dark matter and dark energy”.

WEAVE has been designed and developed by a large team of technicians and scientists in Spain, the United Kingdom, the Netherlands, France, Italy, Hungary, and Mexico. Gavin Dalton, Principal Investigator on Weave, from the University of Oxford and of the Science and Technology Facilities Council's RAL Space, says: “It is most exciting to see the sustained efforts of so many people united at the telescope, and at last to be able to set working the positioning system. WEAVE has required ten years of development, with many complex moving pars, and components developed in laboratories throughout Europe. As a result, at the Roque de los Muchachos Observatory we are about to offer astronomers a new and improved way to look at the stars”.

The Instituto de Astrofísica de Canarias is a member of the WEAVE consortium from the start, and has taken charge of supplying important instrumental packages for the full instrument. The main components of WEAVE provided by the Instituto de Astrofísica de Canarias have been the field rotator, designed and made in collaboration with the IDOM company (Spain) and the prime focus corrector, designed in collaboration with the Isaac Newton Group of Telescopes (ING) with the support of the Konkoly Observatory in Hungary, and manufactured by the SENER aerospace company (Spain). In addition, the IAC has given its support to the development of the fibres positioner and the spectrograph, as well as the development of software for the analysis of the data from WEAVE.

According to José Alfonso López Aguerri, the Principal Investigator for WEAVE in the IAC, “the WEAVE project has permitted Spanish companies to obtain know-how in front-line technologies which will let them opt for contracts in major future scientific projects. It has been a pleasure to work with a great technical team to complete the instrumental packages which we were assigned within the consortium”.

Commissioning WEAVE will start after the instrument has been integrated, and will last between two and three months, after which there will be observations for science verification, followed by routine observations and open time. The first assignations of open time have already been awarded. They are part of an International Time Project (ITP) and an announcement of opportunity for open time will be published once the commissioning of the instrument has been completed.

For Marc Balcells, the Director of the Isaac Newton Group of Telescopes (ING), “the ING initiated the project to build WEAVE after a wide consultation of the international community which used the observatory. Our vision is to guarantee that the WHT will continue to supply the astronomers with the data they need to answer some of the most pressing current problems about the Universe. It has been exciting to build some of the parts of WEAVE, with the strong support of the STFC, and to start the tests, now that the hardware is being set up and made ready. We really want to use it on the sky and to start scientific research with it in a few months”.

The Spanish astronomical community has been interested from the beginning of the project in the capacities and in the science which WEAVE will produce. In particular, some 60 Spanish astronomers from different institutions have been active in the design of the astronomical surveys which WEAVE will carry out in the next five years. Several of these surveys will be led by IAC researchers.

For Jesús Falcón Barroso, Principal Investigator of the WEAVE-Aperif survey, “WEAVE opens a unique window to explore the Universe. The large surveys of stars and galaxies which will be made will give a radically different view, not only of our own Galaxy but of tens of thousands of galaxies at cosmological distances. This will let us tackle some key problems in Astrophysics, such as the formation and evolution of the Milky Way, or the effects of environment in the transformation and the evolution of galaxies in general. WEAVE represents the best laboratory to unveil the physical mechanisms which govern the formation of structures on different scales in the Universe”.

More information can be found in the press release from the Isaac Newton Group of Telescopes (ING): http://www.ing.iac.es/PR/press/weave_july_2021.html 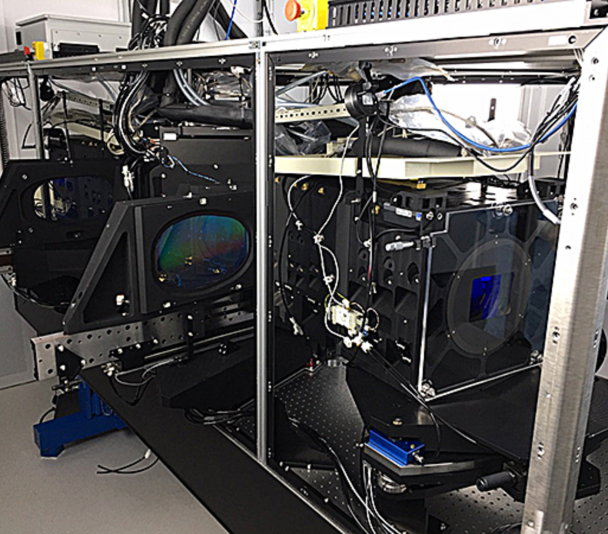