Advertised on:
10
2014
Journal
Monthly Notices of the Royal Astronomical Society
Description
We present a 3D map of extinction in the northern Galactic plane derived using photometry from the INT/WFC Photometric Hα Survey of the northern Galactic plane. The map has fine angular ( ˜ 10 arcmin) and distance (100 pc) sampling allied to a significant depth (≳5 kpc). We construct the map using a method based on a hierarchical Bayesian model described in a previous article by Sale. In addition to mean extinction, we also measure differential extinction, which arises from the fractal nature of the interstellar medium, and show that it will be the dominant source of uncertainty in estimates of extinction to some arbitrary position. The method applied also furnishes us with photometric estimates of the distance, extinction, effective temperature, surface gravity, and mass for ˜38 million stars. Both the extinction map and the catalogue of stellar parameters are made publicly available via http://www.iphas.org/extinction.
Related projects 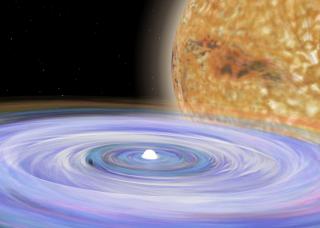 The study of binary stars is essential to stellar astrophysics. A large number of stars form and evolve within binary systems. Therefore, their study is fundamental to understand stellar and galactic evolution. Particularly relevant is that binary systems are still the best source of precise stellar mass and radius measurements. Research lines