This morning, in the Cultural Space of the CajaCanarias Foundation in Santa Cruz de La Palma there was a public presentation of the Report on the Socio-economic impact of the Thirty Metre Telescope on the Island, by the Professor of the Department of Economy, Accountancy, and Finance of the University of La Laguna, its author. The report shows that the installation of the TMT on La Palma would not only be a milestone in the development of astrophysics, but it would have a significant positive economic impact on the Island. As well as Juan José Díaz, the others who spoke before the presentation were Mariano Hernández Zapata, the President of the Cabildo of la Palma, and Rafael Rebolo, the Director of the Instituto de Astrofísica de Canarias (IAC).

Rafael Rebolo reminded us that the objective of the IAC is primarily to perform frontier science. "Our Institute was created to do science, and the science which we could carry out if the TMT decides to come here would be very important. This is our interest. As well as the socio-economic impact the Spanish scientific community would have 10% of the installation for its use, free of expenses" He added that " But the Institute is mindful of the outcome in serving the interests and the general welfare of the island of La Palma. For this reason we want the socio-economic impact of this scientific installation to be as big as possible, with a minimum environmental impact, and in benefit of this island which hosts us, and to which we are deeply grateful.

According to the report presented by the economist Juan José Díaz Hernández, during the period of construction of the TMT, (2020-2029) the annual investment of 40 million euros in La Palma by the International Consortium promoting the TMT would give rise to the production of goods and services valued at 103 million euros per year, as well as contributing to the generation and/or maintenance of 931 full-time employees per year, which will imply an annual sum of salaries of 21 million euros per year. “The relevance of this economic impact”, said the author of the report, “is clear if we consider that the value of the production generated by the construction of the TMT would be the equivalent of 6.53% of the annual insular Gross Internal Product, generating 3.67% of the annual salaried employment in La Palma. And it was estimated that in this construction phase of the TMT, for every euro spent by the International Consortium of La Palma 2.57 euros in the value of goods and services would be generated. “Equally important”, he added, “ is the quality of the employment created, as can be inferred by the fact that the average gross salary of the employment generated by the TMT (22,700 euros/yr) is 10.4% higher than the mean salary in the Canaries.

Finally he noted that the contribution to economic activity driven by the presence of the TMT in La Palma would produce an annual tax yield of 7,163,386€ and an annual payment to the Social Security of 5.998.057€, which means that the total tax take of the public administration of the state, the autonomy and locally, would amount to 13.161.443€ per year.

During the phase of scientific operation, starting in 2030, the International Consortium of the TMT, explains the report of Juan José Díaz Hernández, would give an impulse to the economic activity on La Palma with an annual spending of 25 million euros, of which 82.5% would be in La Palma. The TMT would produce an increase in the economic activity in La Palma by the Instituto de Astrofísica de Canarias, as well as attracting new activities, such as an increase in the number of visitors to the Visitor Centre at the Roque de los Muchachos and the celebration of scientific events on the island of La Palma. The annual economic impact of all this activity driven by the presence of the TMT in La Palma can be estimated as a value of the production of goods and services, which would reach 74.5 million euros per year, which represents 4.81% of the Gross Internal Product of La Palma.

In addition the functioning of the TNT would generate or contribute to maintain 745 full-time jobs per year in La Palma, which would represent 3,67% of all the yearly paid employment in La Palma. “ The importance of the economic impact of this phase of the functioning of the TMT”, emphasized Juan José Díaz, “ can be seen if we take into account that every euro spent in La Palma would generate 3.37 euros of value in the annual production of goods and services. The average gross salary for the employment generated by the TMT (29,400 euros/year) would be 45.6% higher than the mean salary in Canaries.

Juan José Díaz said finally that the economic activity driven by the working phase of the TMT would give rise to an annual tax take of 6.093.271€ and payment to the Social Security for a value of 6.216.371€ per year, which implies that the annual payment to the state, autonomous and local public administrations would come to 12.309.642€ per year during the 75 years of life of the telescope.

Others attending the press conference were the Director of the CajaCanarias Foundation, Alfredo Luaces, the deputy director of the IAC Casiana Muñoz Tuñón, the manager of the Office of Institutional Projects, and the Transference of the Results of Research at the IAC, Anselmo Sosa, and the administrator of the Roque de los Muchachos Observatory, Juan Carlos Pérez Arencibia, who acted as moderator for the conference. 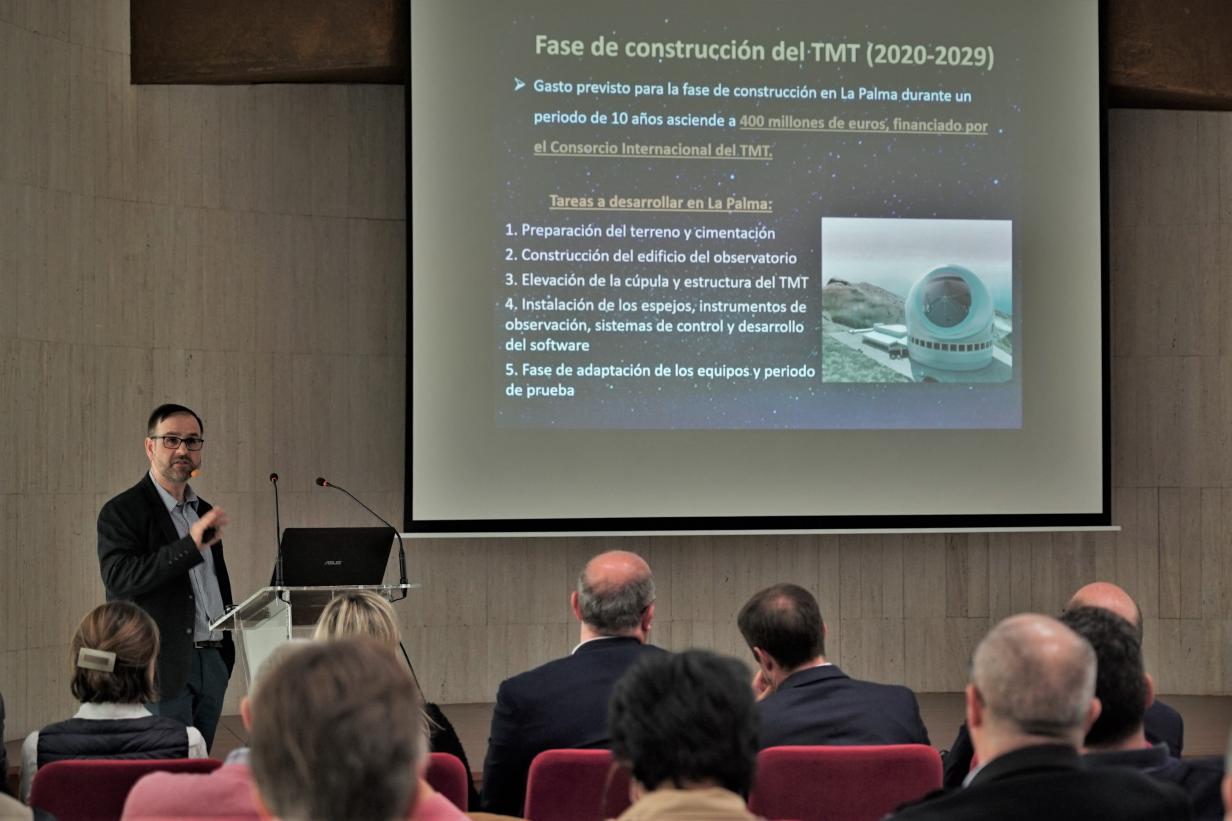