Advertised on:
9
2020
Journal
Monthly Notices of the Royal Astronomical Society
Description
The standard cosmological paradigm narrates a reassuring story of a universe currently dominated by an enigmatic dark energy component. Disquietingly, its universal explaining power has recently been challenged by, above all, the ∼4σ tension in the values of the Hubble constant. Another, less studied anomaly is the repeated observation of integrated Sachs-Wolfe (ISW) imprints ∼5× stronger than expected in the Lambda cold dark matter (ΛCDM) model from $R_{\rm v}\gtrsim 100\,\rm {\mathit{ h}^{-1}Mpc }$ superstructures. Here, we show that the inhomogeneous AvERA (Average Expansion Rate Approximation) model of emerging curvature is capable of telling a plausible albeit radically different story that explains both observational anomalies without dark energy. We demonstrate that while stacked imprints of $R_{\rm v}\gtrsim 100\,\rm {\mathit{ h}^{-1}Mpc }$ supervoids in cosmic microwave background (CMB) temperature maps can discriminate between the AvERA and ΛCDM models, their characteristic differences may remain hidden using alternative void definitions and stacking methodologies. Testing the extremes, we then also show that the CMB Cold Spot can plausibly be explained in the AvERA model as an ISW imprint. The coldest spot in the AvERA map is aligned with multiple low-z supervoids with $R_{\rm v}\gtrsim 100\,\rm {\mathit{ h}^{-1}Mpc }$ and central underdensity δ0 ≍ -0.3, resembling the observed large-scale galaxy density field in the Cold Spot area. We hence conclude that the anomalous imprint of supervoids may well be the canary in the coal mine, and existing observational evidence for dark energy should be reinterpreted to further test alternative models.
Related projects 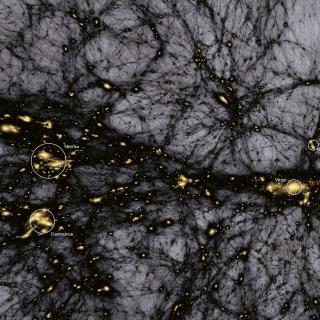